When the brakes failed at seventy miles an hour in rush hour on the M25 I didn’t panic, I calmly said the word 'no' as if in response to an incorrectly answered question. I used the gears to slow the car down and worked my way over to the inside lane, and then to the hard shoulder. I almost made it to a standstill but I ran out of road where the hard shoulder gave way to an exit. I had no choice but to take the exit, and ended up driving into the delightless Surrey town of Caterham.
I'm sure someone's going to put me right here - tell me how convenient Caterham is - just twenty minutes from all the top West End shows, the galleries, the museums - you're a mere thirty-seven minutes from the O2 Arena and there's a flower basket hanging off every lamp post - we've even got a Waitrose. But there’s a drabness and desperation to the place it’s as though most of the population are fully aware that they wouldn’t live anywhere near this place if it weren’t for its proximity to gainful employment in Central London.
I pulled up alongside a row of terraced houses on the main road heading in to Caterham. I’d actually done a tour of the town - I found that by pumping the brakes I could bring them back to some semblence of functionality - apart from one heart-stopping moment when my foot hit the floor and the traffic ahead started getting alarmingly close because I’d forgotten to pump, the car seemed to be back to normal. I didn’t mean to do a tour of the town but I figured I needed to find somewhere safe to park for a couple of hours, somewhere accessible to an AA man in a tow truck.
I saw the sign for Waitrose and naively assumed that a supermarket of that size and noteriety would have a car park (ok, I’ll admit it, I’ve been Americanised). It didn’t, so I followed signs for town centre parking and found myself driving into a multi-storey. A multi-storey car park isn’t much fun when you’re not sure of your braking power. I didn’t want to park in there because it turned out to be attached to a Morrison’s supermarket and it closed when the supermarket closed. I didn’t know how long I was likely to be there, I was facing an uncertain future.

I ended up facing the other way on the road I’d come in on, in a line of small parked cars outside a line of small terraced houses. Next to me, just the width of a Fiat Punto door away, traffic hurtled by. I studied the houses. I wondered who lived in them. I was acutely aware that even though I wasn’t in a resident parking space I was probably taking someone’s assumed space, and when they came home from work they’d have to park up the hill in a side street and unpleasantness might ensue. Parking wars. But parking wars assume a sense of community, or community spirit, and I don’t think there is any in this place. People move in, the renters, the buyers, they exist for a while, then they move out and exist somewhere else. If they were ever noticed they’re soon forgotten.
A very pregnant woman in a business suit walked past my car. She was talking on a phone. She put the key in the door of a house further up and let herself in. The neatly trimmed hedge gave this house an owner-occupied air. The one next door, the one I was parked outside looked rented - the flowerpot by the door containing a long dead plant, the discarded engine treatment oil container - they give some sort of clue. There’s a pride, or even a sense of duty that goes along with home ownership. The curtains of this one, the rented one, are drawn even though it’s only five thirty in the afternoon. Perhaps the occupant is a shift worker, maybe they’ve gone away on holiday, or left in the morning before it got light. Or the place is empty, waiting to be re-rented, to play host to some fresh misery.
These places would have been built for workmen and their families in the nineteenth century. Front room or parlour for best, dining room, small kitchen. Upstairs two bedrooms and a box room off the back. Outhouse in the back yard. Front garden for flowers, back garden for vegetables. Humble places, all a workman needed. There have been a few upgrades but has anything really changed?
We generate a lot more rubbish these days. The front gardens once so charming are filled with colour-coded wheelie bins - a brown one for garden waste, blue for recycling, black for rubbish. There was even a small green one for food waste. When I was a kid we had a round galvanised dustbin which was emptied once a week even if it wasn’t full. Newspapers were used to light the fire, bottles were refundable, food scraps were thrown into the stove that heated the house and provided hot water. There was never much cardboard becuse we never bought anything. I’m not saying it was better - our lives were austere, the house was cold, I was forever hungry and I felt guilty for eating. But there was less trash, rubbish, garbage or detritus. 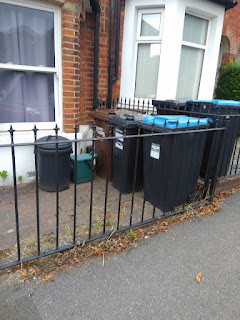