We were in Memphis when the storm (sorry superstorm) hit. Or we might have been in Chicago. Or somewhere in between because we played in San Antonio, Austin, Dallas, Memphis and Chicago on consecutive days and my memories are already beginning to blur.

I was a bit concerned. Catskill was directly in the projected path of Superstorm Sandy. (I've been calling it a hurricane but it's slowly coming to my attention that everyone else is calling it a superstorm so I'm attempting to join in here). I was worried that a tree might fall on the house. We've got a lot of trees. Occasionally I take a stroll around the back yard, count them up and catalogue them all, marvelling in a fearful sort of way at the fact that I own so many trees (if you can actually own a tree – it seems like an odd idea). And then I lose count or forget. I think there might be eight of them, fucking great big maples lined up along either side of the property line towering over the grass in between with branches touching one side to the other. In the summer, when they're in full leaf, the effect is faintly terrifying. Especially at night - it's like being in a vast organic cathedral. I've often been out there on my own at night, tending the barbeque with just a wall light between me and the murky towering blackness, cicadas kicking up a deafening racket and the distant wail of freight trains rumbling through the night from Buffalo to New Jersey...
We really should have employed the services of a tree surgeon but we couldn't afford it. So somewhere on the road between Memphis and Chicago I was trying to console myself with the idea that what we saved on not hiring a tree surgeon we could put towards the cost of repairing the house and paying the increased insurance premiums.

It was all going to be fine - I grew up on a high cliff top on the south coast of England, constantly buffeted and battered by violent south westerly gales. Roads were frequently rendered impassable by shingle thrown up from the beach. Waves would hit the ninety foot cliffs and water, shingle and seaweed would fly another twenty feet into the air. I used to go to school in this weather – on a double decker bus listing at a thirty degree angle as the wind smashed into the side of it.

They showed us pictures of buses being tested for stability and sometimes the bus conductress used to laugh it off but I could tell she was just as scared as I was. Thankfully the bus never blew over. There weren't any trees – I think I was eight before I actually saw a tree in real life – they wouldn't grow where we lived. I read stories from some parallel universe where boys climbed trees and got lost in the forest, and I felt vaguely inadequate as though it was my fault that in Peacehaven and Telscombe Cliffs the only vegetation apart from grass was hardy privet, gorse and Spanish broom.
We listened to news reports of rising tides, warnings of imminent disaster and so on, and I texted a friend in Asbury Park, New Jersey asking if he was OK. He sent me a photo of his girlfriend's house. The storm hadn't happened yet, the tide was still rising and the ground floor of her house was almost completely under water.

They said it was going to be worse than Irene. Personally  we were very lucky there. I became the proud owner of a dilapidated Cape Cod two days before Irene. We were in England getting ready to start a new life in America. It occurred to us that we really ought to get some house insurance so Amy called a few insurance companies. They told us to call back after the hurricane. We saw footage of water flowing over the top of a road bridge across the creek near our house in Catskill. We looked at a house there back in the summer during one of our many house hunting expeditions. It was creepy – Amy didn't like it because there was an old pair of crutches built into one of the walls of the rather slimy basement. 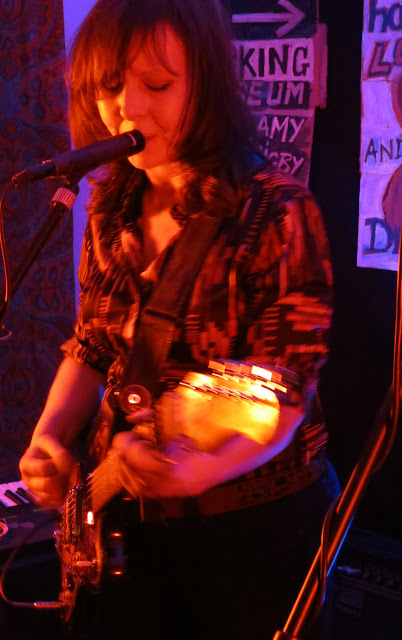 I almost quite liked the place in spite of the traffic noise from the bridge you could see if you looked upwards from the back yard - the bridge that later had water flowing over the top of it. That house must have been almost totally submerged. Fortunately for us there was a loud wail and suddenly I was in that parallel universe - the one where othe boys climbed trees and so on – 'I love that sound!' I exclaimed, and then we couldn't hear ourselves speak for the next ten minutes as five miles of freight train thundered across an adjacent trestle. So we did the sensible thing and bought a house on a hill an attractive distance away from the railway line.

We were very lucky. The town was devastated. The ice cream place by the creek where we dreamed of having a root beer float, all washed away. The t shirt printing shop – that had to be gutted and completely rebuilt (we got our new t shirts printed there before we went on tour). The restaurant down where Catskill Creek flows into the Hudson river was destroyed. And so it went on. And miraculously our house and surrounding neighbourhood came out of it unscathed.

We arrived at Newark Airport and drove through torrential rain to our new home in a national disaster area. The rain never stopped tipping out of the sky for four and a half days. We stayed in a friend's house with a tin roof. In the middle of the third night Amy asked me if it was the end of the world. I thought it probably was though I didn't like to say.

Catskill wasn't the worst affected – in the town Pratsville which is only thirty five miles away just about every building was badly damaged. We drove through there only the other week, over a year later – it was like a ghost town. Some people have given up, they're not coming back. There were a lot of shabby houses with new roofs. On Saturday night at our house concert someone told me how they bought a few groceries in the only remaining store in Pratsville and the owner was moved to tears of gratitude.

All this might sound depressing but I'm trying to talk about our house concert and why we did it.

We've been lucky twice – Sandy took a left turn before it got to us and ploughed off into Pennsylvania.

We were going to put on a house concert as part of our Kickstarter campaign to raise money to put out our latest album but we only sold one or two tickets so the idea put itself on hold. We weren't even sure if we could get away without either – someone always gets upset if you do anything noticeable. But if it's a charity fundraising event... 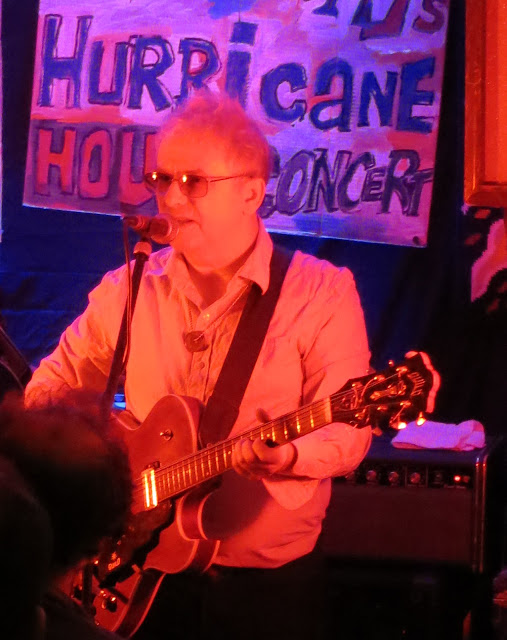 The house was a mess and we'd been away on tour for two months. In the second month we drove eight thousand miles coast to coast and north to south and back again. It was a little bit overwhelming but we did it and I'm glad we did. We're like Ike & Tina Turner doing Proud Mary – we never do things the easy way. In between touring and recording we're fixing up the house. We love this place and we're doing it with pride and on a low budget. We do a bit, we run out of money, we go on tour, come home, do a bit – a few repairs, a bit of paint, tiles, a shelf or two... We're very lucky. 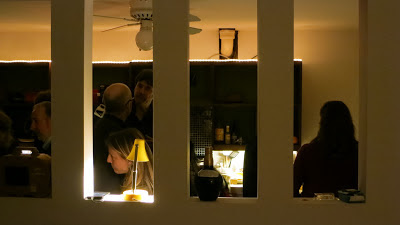 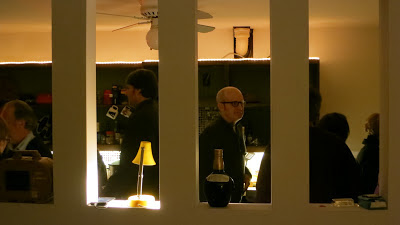 The house concert was almost like a housewarming party, even though we didn't know a lot of people who came. We sort of did though – I recognised names from emails, mail order, facebook and so on. And there were some we knew from other shows we've done. It was fun – I wanted it to be a celebration as much as a fundraiser. We should appreciate what we've got. People lost their homes. We were lucky enough to have one to come home to. 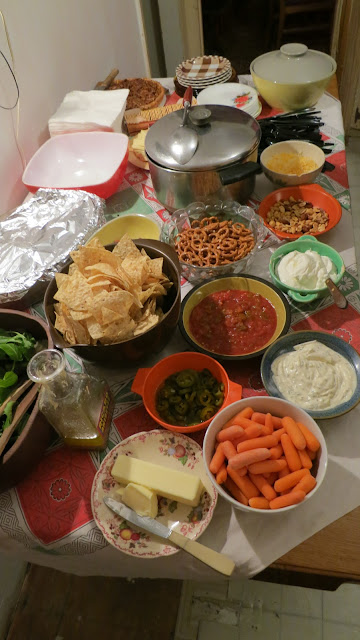 Everyone bought something along with them. People helped out, laid out food, took turns overseeing the list of ticket holders, that sort of thing. The police chief who lives across the street was very nice about it all - he actually said well done and told us not to worry about the parking restrictions. David Greenberger helped me to paint even more signs which were meant to be helpful but probably ended up being charmingly confusing. I'd already painted some large ones - "3 hours of Love, Peace and Dischords" in honour of the Woodstock contingent (there's nothing going on in Woodstock so they all have to come to Catskill to get their kicks), a big Eric & Amy sign that we hung in a tree and illuminated with a torch.

Frank Cuthbert bought a load of folding chairs along from his art gallery in Catskill, Brik. His lovely girlfriend Danette somehow managed the catering and put me in mind of a Pan Am air stewardess. Next time we're going to get her a uniform and turn the place into a homemade aeroplane. Later on she commandeered the kitchen as her personal dancing space. 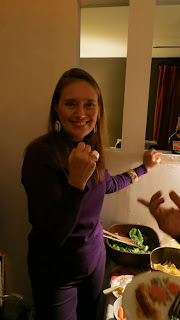 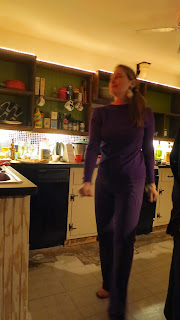 We raised $1300.16 and donated it to Occupy Sandy. I know they say they prefer 'in kind' donations and only take money as a last resort but there's no bartering system for gasoline and heating oil so I hope the money does some good. 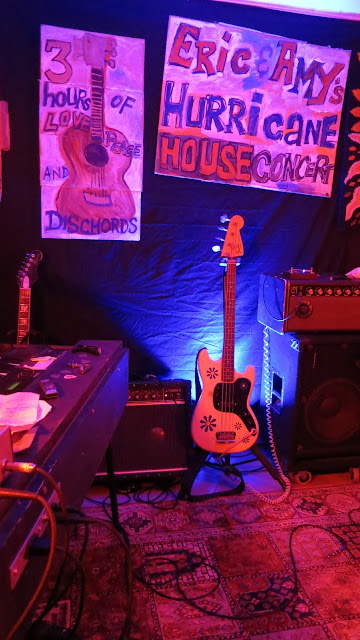 And finally I should mention the vinyl - we have vinyl copies of our new album!!! We've got boxes of them hidden under beds, in cupboards, up chimney flues... We've got so many of them we're having to sleep standing up in a corner of the bathroom. Help us to regain our sanity - buy a copy here: http://www.amyrigby.com/amyshop.html