Across The Great Divide 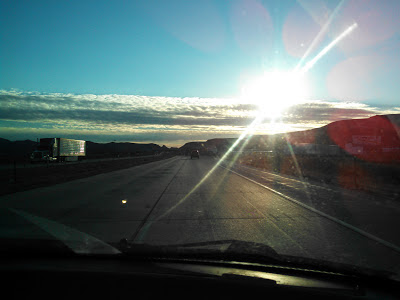 Excuse me you cunt, we've driven three thousand miles coast to coast across the USA, turned right at San Francisco and done a further two days hard driving to get here so would you mind shutting your fucking trap or leaving because we don't want to hear you trying to impress your dolly-bird date when we're trying to play for these people.

A fine opening to the show. Amy actually heard the guy say to the girl stop trying to sleep with me. Well, really. He looked quite offended after my reprimand but he left and everyone was pleased and we started up with Astrovan off our first album in two different tempos because I was a bit adrenalised by the diatribe.

I love Seattle. It's about as far from England as you can get without doing something daft like crossing the equator so it's a mystery to me why the musicians here are so compatible. Same wit, same jokes, same spirit. Grunge gave them something to kick against - the Seattle music scene is open to anything so our free-form-folk-rock-metal-pop-skiffle thing really works.

We wound up with another impromptu Seattle subsupergroup - Johnny Sangster on guitar, Jim Sangster on the bass, Mark Pickerel on tambourine (Is this what I'm reduced to Eric?), Amy on the organ and me on my first broken string of the tour doing Reconnez Cherie as an encore. We just had to do an encore after the soundman had engaged us in a post-set group hug. Never been hugged by a club's sound engineer before - threatened, but never hugged.

Johnny Sangster's solo opening set was a sensation as was Mark Pickerel - two great supports and then us  - a real value for money musical event. I wish Seattle was on the East Coast so we could play there more often though the excitement might be a bit too much for us. As it was we were glad to have the next day off.

Two weeks ago we were playing at a house concert on Rhode Island. We stopped off at our place on the way to Pittsburgh where we stopped off on the way to Indianapolis for an intimate Tuesday evening show in front of maybe as many as twenty people. And then we carried on to Springfield Missouri for a fabulous early bird special between the bingo and happy hour. Loads of people - no one comes to Springfield so we were a bit of a novelty. And it was a good show which I hardly want to mention because they've all been good shows. 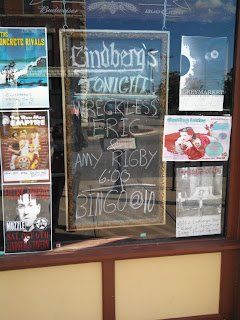 I can't begin to explain how bizarre, back-breaking, mind-numbing and just plain exhilerating the next four days were. I haven't driven across America coast to coast since 1979. From Missouri onwards it was like being in a giant film set, watching John Wayne country onfold in all its vastness beyond our filthy windscreen.

We stayed in Wichita, in an instantly forgetable motel. We had dinner in an Italian chain restaurant. The waitress was a young woman from California who came to Whichita for college. She wanted to go back to California. She told us downtown Wichita was quite picturesque but we never found it. All we saw were shopping malls – Staples, JC Penney, Starbucks, Panera, Macy's, Sprint, AT&T, Radio Shack, Sports Authority, Walmart, Target, Home Depot, Claire's Accessories, Vitamin Shoppe, Gap, Arby's, Autozone, MacDonalds, Burger King, KFC... It seemed to go on forever and then it was back to Burl Ives and The Big Country and I'm singing Wichita Lineman in my head all the way to Denver. We could tell we were in Denver and not back in Wichita because the retail outlets were in a different order - Home Depot, Autozone, MacDonalds, JC Penney, Macy's, Gap, Target, Walmart, TJ Max... a thousand miles of shopping malls and back to the scenery. It was freezing too. And in Denver it started to snow.

Somewhere along the the highway in... it might have been Kansas, we saw signs for the world's largest prairie dog, a five-legged cow, a six-legged cow and a miniature donkey called Roscoe. The World's Smallest Zoo - we didn't actually get to see all these wonders because the place was closed, boarded up with a For Sale sign hanging off it. And the night was coming down and it was all faintly terrifying. Who needs a zoo in a place like that? Who ever came to see it? No one perhaps, and that's why it was boarded up. 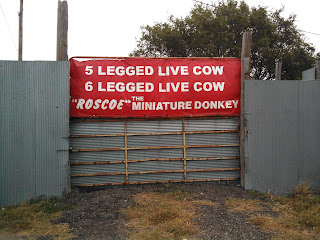 Out here you could probably tell people anything and they'd believe it. A brilliant strategy – train 'em up in the ways of ignorance and they'll believe anything you tell them – there are little brown men coming to rape your unborn fetuses in the middle of the night, there's all manner of evil out there beyond the safe confines of Kansas, or Wyoming or Nevada. Pro-Lifers, the Assembly Of God. When You Die You Will Meet Your Creator – what ever are you going to say to him? Fine bloody job you've done there Jesus God old mate – loved the shopping malls. No evil there.

Pro-life – it seems to me that with that lot a human life gets the best protection as long as it stays in the womb. Get born and you're fucked. A sixteen year old girl from a trailer park with a deadbeat boyfriend, no prospects, no hope, but the baby must be protected. Until it gets born. Then it's just useless human trash, the product of a godless unmarried mother.

Strange, these people who hold human life in such value. Do they really give a flying fuck whether or not people live or die. They just need livestock for their people farm. A capitalist society needs a workforce, a healthy well-nourished, properly housed workforce would surely be more efficient but that's not how it works here. - here on the People Farm we're heading for a subtle form of slavery.

I hope you've all registered to vote. I hope everyone in America who reads this bothers to go and cast their vote. I haven't got a vote here, I'm a resident but not a citizen. I pay taxes - income tax, property tax, school tax, village tax... plus the tax on all the gas we've put in the car to cross America - but I don't have a vote. So I say please, please, Vote For Me. I don't mean Vote For Me, I mean VOTE FOR ME. Or do it for yourself and everyone else. But please do it!!

We met up with Roy Loney in San Francisco. I would have liked to have had him get up and do a couple of songs with us but I didn't want to put him on the spot and I was too shy to ask. Anyway the soundcheck was too short to sort anything out – the soundman was three quarters of an hour late and generally seemed to have a lazy attitude. You find that in some towns – it's as though it might seem uncool to make anything more than the minimum effort. He was nice enough though, and the sound was probably OK in the room, and when Amy's microphone fucked-up he at least came over and waggled the stage box connections until it was sort of working, so I don't want to slag him off. I don't think it's worth driving the entire width of America to play at the Hemlock Tavern. I hope we can find a better venue next time.

We had a house concert in Chico the night before. The hosts, Marcel and Mary, have a house surrounded by beautifully planted and landscaped gardens. We stayed in a room full of cowboy memorabilia and western trinkets. The morning after the concert I got up early – eight o'clock - which is early for me though Amy had probably already been up for two hours. Amy has a secret morning life which I know little about, she writes in a notebook, does sewing, stuff like that. And sometimes she even sneaks out for coffee. Or so I believe though I can't be certain of any of this because I'm usually punching out zeds.

But this particular morning I was up around eight and Mary gave me a guided tour of the grounds, pointing out exotic birds in the equally exotic Californian plant life. It was a great start to the day and one of the highlights of our west coast adventure.

And then we got the terribly sad news that Jim Wunderle was dying back in Springfield Missouri. Amy's known him since nineteen eighty something – Last Round-up recorded their album in Springfield - Lou Whitney produced it and Jim Wunderle was the engineer. I met Jim in 2008 in Kansas City. He came to see us play at a club called Knuckleheads, a place that looked almost exactly like the country 'n' western venue in The Blues Brothers (we have both types of music here - country and western...) The show went really well in spite of expectations and afterwards we hung out in front of the club which was festooned with neon signs and surrounded by railway lines. I've got a load of photos of Jim, his wife Terry, Amy and me silhouetted in front of the neon signs. I'd put one in here but they're at home and I'm not.

I was really pleased we were going to Springfield and seeing Jim again - I recognised him as a kindred spirit or whatever. Someone sent me a clip of him performing Whole Wide World with some of The Skeletons and I felt that there was something completely unique about him. I was glad to see him again, a bit nervous because he and Lou Whitney are like Amy's uncles and older brothers all rolled into one, and I wanted their approval for what we're doing together.

We had a great time - Jim was a delight and we railed against the world together - men with pony tails, young shop assistants who answer your thank you with no problem (that was one of Jim's particular peeves), five string basses (ungodly), the inadvisability of eating near the railway station...

He wasn't in a good way - his health had suffered and he'd age considerably since we last met but we would never have imagined that less the two weeks later he'd be dead. Amy's very sad about it as I'm sure you can imagine, and so am I. I made a friend and now he's gone. But at least I had the pleasure of knowing him for a short while. That makes me happy.
Posted by Eric Goulden at 03:38 6 comments: