I should be strutting about in a fur hat, large mirrored shades and possibly a cloak - a pop svengali, top producer and engineer with a sound coveted by many and achieved by none - because I'm the man who produced and engineered the new Amy Rigby album, a rough, tough psychedelic garage record, her first solo album in twelve years, and her best yet.

But I couldn't really carry it off - my head would itch in the fur hat, the mirrored shades would be covered in fingerprints, and even though I might quite like it I'd feel ridiculous wearing a cloak. So instead I've cast myself in dual roles as Bryce McCafferty, the dependable but tempermental bass playing sideman, and as Amy's erstwhile road manager who I imagine as a sort of Jon Voight character - buckskin jacket, silk scarf, cowboy boots, and a good foot or so taller than myself.

I set the stage, switch on the amps, tune up the twelve string, put the capo on the second fret and report back to Ms Rigby that all is ready. Then I walk back on as Bryce McCafferty and pick up the bass guitar.

Bryce doesn't give a fuck. He's the king of crass. He watches as another more willing band member backs the truck into a bollard or a low brick wall: 'Oooh! I saw that coming - bang goes the deposit!'

A guitar goes missing: '...yeah, I saw that in the dressing room as we were leaving last night and sort of wondered about it.'

'I'm not setting foot on that stage until I get my per diem - I'll do the soundcheck but there's no way I'm going on for the show until I get paid.'

The band leaves the stage with the applause still ringing. Band members metaphorically patting themselves and each other on the back, saying the dumb things that euphoric band members are apt to say. But not Bryce - Bryce is too cool for that - 'Here, did you get your per diem yet? I still didn't get mine...'

Bryce... at turns scruffy, unshaven, abstracted or satorially elegent. Reprehensible but quietly dependable, even when he's drunk. A Thursday gig might see him in grubby jeans, Saturday nights find him fully suited and booted.

Bryce turns and looks at the drummer: 'Who is it this week then? Have we worked together before?'

On this tour Ms Rigby is going through more drummers than Spinal Tap - there's nothing dark or lurid about it, it's just that unlike Bryce they all have day jobs.

I love Bryce McCafferty! I only invented him because promoters were announcing me as a featured musician on Amy's shows, and although I find that very flattering I was worried that it might take the heat off when I come back and do my own shows next month. Because next month I'll have a new album out and I'll be back to boring old me.

Catch Bryce McCafferty and a gainfully employed drummer on tour with the incomparable Amy Rigby: 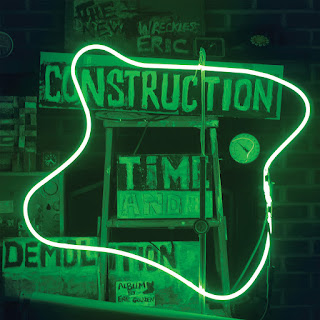 Posted by Eric Goulden at 19:21 No comments:

September
17 CATSKILL NY The Avalon Lounge
18 PHILADELPHIA PA House Concert
19 BALTIMORE MD Ottobar
21 RICHMOND VA Fuzzy Cactus
22 CARRBORO NC Twin House Music
23 ASHEVILLE NC Fleetwoods
24 NASHVILLE TN East Rooms
25 MEMPHIS TN Gonerfest
26 LOUISVILLE KY The Zanzabar
27 ROCKFORD IL Mary's Place
29 MINNEAPOLIS MN Hook & Ladder
30 MADISON WI Kiki's House of Righteous Music
September
01 MILWAUKEE WI Club Garibaldi
03 COLUMBUS OH Spoonful Records
04 BUFFALO NY Mohawk Place
05 ROCHESTER NY The Bop Shop
more to follow
As Wreckless Eric he needs little introduction — he wrote and recorded the classic Whole Wide World and had a hit with it back in 1977. Since then it's been a hit for countless other artists including The Monkees, Cage The Elephant and most recently for Billie Joe Armstrong of Green Day.
As Eric Goulden it's a little more complicated - a musician, artist, writer, recording engineer and producer, he didn’t like either the music business or the mechanics of fame or the name he’d been given to hide behind, so he crawled out of the spotlight and went underground. He went on to release twenty something albums in forty something years under various names - The Len Bright Combo, Le Beat Group Electrique, The Donovan Of Trash, The Hitsville House Band, and with his wife as one half of Wreckless Eric & Amy Rigby, finally realizing he was stuck with the name Wreckless Eric.
Eric’s three most recent albums ‘amERICa’, Construction Time & Demolition and Transience are widely praised as his best work to date. His albums encapsulate pop, bubblegum, garage trash and psychedelia. His live performance is a sonic journey through time and space incorporating songs from all stages of his long career. Unmasked, unhinged and still alive - a survivor of Covid-19 (resulting in a near-fatal heart attack), Eric presents himself alone if not simply with electric and acoustic guitars, electrified harmonica, piano and electronics of his own making.