Belfast, The Hardboard Hotel, A Spider From Mars

I was on an airplane. I was in a rental car driving very fast. I was on a ferry crossing from Stranraer in Scotland to Belfast in Northern Ireland. I was in a hotel in Belfast - the Europa Hotel - the same hotel I stayed in the first time I came to Ireland back in 1978.
The Europa Hotel is a four star dump, less salubrious than I remember from the first time I stayed in it though it's no longer surrounded by barbed wire. It was known during the troubles as the Hardboard Hotel because the windows were frequently blown out by bombings. It's on record as being the most bombed hotel in Europe having survived thirty six bombing attacks. I've been told there's an old commercial hotel somewhere in Belfast that suffered more bombings but the Europa Hotel is much more high profile so it carries away the glittering but dubious prize.
My room was on the sixth floor. It was small and over furnished - a desk, a round table, an office chair, a small armchair, a wardrobe and a double bed. A frosted glass door lead to a tiny bathroom with a toilet, shower and washbasin, and a collection of clammy white towels. The window looked out onto a grey wall and if I sat on the desk and looked across at an acute angle and downwards I could see the loading door of the Belfast Opera House.
I don't think this was the room the Clintons stayed in back in November 1995.
I played in a place called the Black box. I had no idea what it was going to be like but it was a pleasant surprise. Amy and I played there a few years ago. I had flu at the time and some of the audience were old timers who thought I was there to recreate 1978 for them. Some of them turned up again this time but I was on top of it, and anyway they were outnumbered.
My show was in the afternoon and afterwards Woody Woodmansey was doing an In Conversation thing. I felt a strange panic rising up. I wanted to get out before he arrived. He played the drums on some of my all time favourite records.
I'm not much for meeting celebrities and musical heroes unless they know who I am and what I do and we can meet on an equal footing. Otherwise I'm just some nerdy bloke trying not to ask a load of dumb questions.
I don't know why I worry about that, I've meet plenty of nerdy blokes who ask what they probably think are dumb questions and I love them for it. They're fans, they're into what I do, they're interested, they support me and help keep me going.
What I'm trying to say is I didn't want Woody Woodmansey to be an arsehole, and if he was I didn't want to find out about it. I thought it might be better if he remained intact, a concept, the last surviving Spider From Mars.
I didn't make it out in time. the promoter was suddenly at my side:
'Eric, I'd like to introduce you to Woody - Woody this is Eric...'
He was a perfectly approachable looking Yorkshire sort of bloke. We shook hands.
'Did you really live in Woodmansey?' I heard myself say, while some other version of me standing off to the side shouted YOU FUCKING TWAT! at me through cupped hands.
'Er, well, yeah, for a bit'
'I used to live in Hull' I offered, by way of an explanation.
'I know you did' he said.
We had a talk about Hull, who's left , what a special place it is. I stayed for his talk and it was absolutely riveting. I didn't join the queue to buy his book, I'll buy it and enjoy it when I get home rather than lug it around with me, fall asleep over it and forget where I'm up to. I know it's going to be good.
I met him and his wife again outside, smoking cigarettes. I thanked him for the talk and we discussed the vagaries of touring. He wished me the very best of luck. They were nice people.
I went back to the hotel and watched an episode of Last Tango In Halifax.
Posted by Eric Goulden at 21:58 No comments:

Another Cheery Story about Another Squalid Hotel

Last week when I had to drive to Stranraer to catch a ferry to play in Belfast a friend booked me a fantastic country hotel in the wilds of Lancashire through Hotels.Com. It was a luxury suite - more like an apartment - and it was only £40 for the night. I'm usually all about Premier Inns - they're very unexciting but at least they're consistant and there isn't a nosey old git in a sleeveless V neck pullover hanging out in the basement dining room, diluting pineapple juice behind a reeded hardboard partition.
As I had a night off tonight followed by a show in Barnoldswick which is itself in the wilds of Lancashire I thought I'd give hotels.com a go myself. The hotels were all a lot more than £40 a night, apart from a few that were basically rooms above pubs but I decided to splash out on somewhere nice to hole up for a couple of days. I found one in Skipton that I thought would be perfect.
The entrance was very smart with its canopy that had HOTEL picked out in lights you could see a mile off down the road. Any effect of grandeur was lost because the building looked like an ex-hospital/mental institution/rope factory/gunpowder factory/barracks or workhouse.
I could smell the deoderisers as soon as I walked in. The man at the desk was having an overlong phone conversation with a future guest:
Yes, yes...yes that room will be available....yes...the duration of your stay... with full leisure centre access....yes, yes it has been...for the time of year...mmm, yes, they should do, yes indeed...yes...yes, looking forward to seeing you on the 15th....mmm, yes...yes, and you too....yes...
He didn't acknowledge my presence until he eventually got off the phone and we got down to business. No apology for keeping me waiting. I didn't mind waiting but front desk etiquette demands an apology to which guest etiquette demands a not-at-all brush-off. There's a system in place, an accepted order of things.
Have you stayed with us before sir?
No, I usually stay at the Premier Inn. (I don't know why I said that)
Why would you do that when you could stay here? 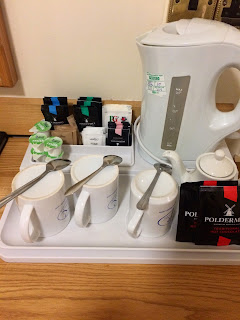 The room was long and narrow with one double bed, two bedside cabinets and a two-seater settee that was probably a sofa bed though I was too squeamish to investigate. There was a line of cabinets with drawers, a flat screen TV and a tea making station, all bunched up at one end of the room, and beyond was a large expanse of mauve carpet running out to the badlands somewhere beyond, over towards the window. A  trouserpress come ironing board configuration was screwed to the wall under a bad painting of a hyacinth with a decorative brass striplight over it to perhaps facilitate closer study of the brushwork.
The person who furnished this room had obviously run out of either ideas or furniture or both. There was a strong smell, some sort of deoderiser - the stuff that brings the carpet back after the incontinent dog dies on it. A strange smell, chemical lavender with sour undertones masking something infinitely more unpleasant but possibly by comparison much more wholesome.
I sat on the sofa, much like I imagine a normal person might, and tried to get on with answering an email or two. The wi-fi kept cutting out. I realised I was cold so I went to investigate the heating. The thermostat was old, seventies, possibly early eighties. A grubby set of instructions was glued to the wall underneath. I read the instructions, switched on and cold air billowed into the room along with a faint aroma of old cooking oil. I turned the heating control up full.
Ten minutes later the room was icy. I went down to reception to complain. I could have phoned but I wanted to get out of the room because apart from being freezing cold it was starting to give me the creeps.
Down in reception a notice by the phone on the unattended desk told me to dial zero. I explained myself to a man who was very sympathetic and suddenly appeared, bounding down the palatial staircase and talking to me on a cordless phone.
He was a faintly ratty individual, a young man dressed in black with facial hair and a ponytail. He said that as the hotel wasn't fully booked he could find me a room on a different floor where the heating worked. We settled on floor number three and he took me up to see the room. It was horrible but it was warm. He agreed with me that the hotel was a dump and volunteered that considering the state of the place it was way over-priced.
I asked him what it was like working there at night. He paused for a moment, looked around furtively:
'The night brings out all the crazies' he said.
'Some of them answer the door naked - room service...'
'Have you ever had anyone die?' I asked.
'Just the one since I've been here but yeah, it does happen.'
'One night a couple in the honeymoon suite rang down for champagne and strawberries. I went up with the order and the woman answered the door completely naked. He was sitting in the jacuzzi. "My husband likes to watch" she said'
He did a quick glance around, lowered his voice:
'Four hours, I were in there for four hours.' 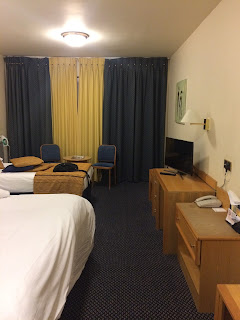 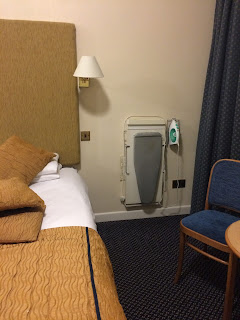 Or the son or daughter could sleep grimly on the single while the parents sit at the table and play cards before retiring to the kingsize where there's plenty of room to sleep in their pyjamas, out of touching distance from each other.
Myself I slept fully clothed on one side of the big bed.
I checked out in the morning. The duty manager was quite snippy about it: 'I'm sorry you don't like our facilities Mr Goulden.'
'What facilities? Are you talking about the trouserpress?'


I checked into a brand new Premier Inn and slept all day in glorious comfort. 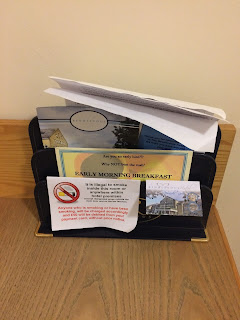