A Video, Some Travel Tips And Grandad's Homemade Aeroplane

As I'm going to tell you a bit further down we've made a video for Do you Remember That.
First I have to waffle on a bit about other stuff that has nothing to do with that, probably so that in my own mad mind I won't appear to be giving it the hard sell, which of course I am. You have two choice - or possibly three: you can click on the video, get it over with and either fuck off or carry on reading, in which case you'll have another chance to see the video further down the page; or you can read the other stuff and then watch the video; or the third choice is... I don't actually know what the third choice is.
I play the part of Barry....

I don't know where or how I used to find the time to constantly update my website and write lengthy reports of tours and trips out and one-off gigs and so on. These days the writing just stacks up in my head rather than in cyberspace or wherever this stuff exists when you click the 'publish' button. My intentions are good but my life is overwrought with busy-ness, and in the few moments I have to contemplate and possibly write an update of some sort I feel like a rabbit caught in the headlights of some monsterous oncoming vehicle which is probably the task at hand. If you can follow all that.
I want to tell you about Wyoming, and in particular the Days Inn hotel in a town called Evanston where I discovered a large and very dubious looking stain on the top sheet at two o'clock in the morning. The stain was right next to my face. We had to be up at some early hour to carry on driving across America. Complaining to the management and having the sheet changed would have cut into valuable sleeping time, and besides, the only person we could have complained to was a grubby and somewhat psychotic looking night porter who didn't really look like the kind of person that would be bothered by a stain on a poly-cotton sheet. Even one created as the result of an enema or other bowel related incident, or an accidental spillage during a birthing ritual. Not that I want to make any sweeping judgements – not about the stain - I mean about the psychotic night porter.
And besides, a successful complaint would have resulted in the changing of the sheet which may well have resulted in our seeing the naked mattress which is something you never want to see, not a naked hotel mattress. I should run a course on surviving hotels and other on tour accommodation.
The first rule, as stated above, is that you never want to see the bare mattress. Sometimes there's a plastic undersheet – and this is totally unacceptable. You'll want to remove it for two reasons: one reason being that the aftermath of an event neccessitating a plastic sheet to protect the mattress will probably have been sponge off by a hurried chambermaid or more likely allowed to air dry. The othere reason is that you'll sweat like a pig and have nightmares about being pre-packaged supermarket food. If indeed you can fall asleep for the rustling of crumpling plastic as you toss and turn trying to get comfortable with your head precariously balanced on a small lumpy hotel pillow (more about hotel pillows in a minute).
You'll need to remove the plastic sheet without ever catching sight of the bare mattress. This is how you do it: gently remove the corner of the fitted lower sheet from thecorner of the mattress, then remove the corner of the plastic sheet and push it under the sheet where you can't see it and pull the corner of the fitted bed sheet back over the corner. Repeat this exercise on two other corners. On the fourth corner which should be the one nearest to the wardrobe, the door of which should be open, remove the corner of the fitted sheet, liberate the corner of the plastic sheet and pull violently until the whole nasty plastic expanse, which you'll notice is a rancid creamy yellow colour, is out and away from the bed. Now stuff it in the wardrobe and shut the door. Put the fourth corner of the lower sheet back over the mattress and try not to think about it anymore. Wash your hands. If you happen to have a pair of surgical gloves you should of course have been wearing them during this procedure.
If you can feel the bed springs don't on any account remove the plastic undersheet. The hotel proprietor will have put the plastic undersheet on not to save the mattress from bodily fluids, but rather to try and keep a quite possibly disgusting and literally shagged-out mattress intact for another five years or so. In a case such as this your only option is to sleep on top of the fully made up bed in all your clothes or leave and sleep in the car.
Hotel pillows – you don't ever want to see a naked hotel pillow. They put pillow cases on them for a very good reason. People you don't know breathe into them and drool all over them and use them to raise the lady's bottom slightly to facilitate deeper penetration during casual acts of hotel intercourse. You should arrange the pillows so that the sides open outwards because you never want to wake up looking directly into the bowels of a hotel pillow. Hotel pillows are often stuffed with surgical waste. Just perch your head on the thing as best you can and try not to think about it.

I don't know why I've just told you all that but I'm sort of glad I have and I hope it's of some use. As I said before, my real reason for writing this blog post thing is to try and interest you in our fabulous new video for Do You Remember That. I was hoping to get a starring role as someone sexy and debonnaire. Instead I saddled myself with playing the part of Barry who signs the event for the hearing impaired. I'm not at all like Barry in real life. Barry is the sort of person who may have stayed in your hotel room before you did.
Amy plays the part of a slightly older but still aspiring singer-songwriter getting her first big break on a regional TV show. Our friend Jeff Economy helped us to make the video. It's a low-budget affair  and we decided to put a tag on the front of it to really set up the story - just like in those early MTV videos from the early eighties. We really hope you like it. Here it is - please feel free to share it with all your friends and let's hope it turns into a virus....

I don't know why I'm telling you all this stuff about hotel mattresses and pillows. There are so many wonderful things I could be writing about if only I could think of any of them. Grandfathering for instance – real life was suspended for a couple of weeks – or perhaps I should say everything but real life was suspended while my daughter Luci and grand daughter Tiger Mae came for a visit. The house was filled with laughter and chaos and we couldn't get much done but it didn't matter. I've become quite an expert on animated films for children and I've lost count of how many times I've seen Shrek and Toy Story, and danced insanely to Tiger's favourite 45, Steel Guitar Rag by The Dynatones. If you want to dance insanely to it yourself you'll have the opportunity very shortly when I re-launch The Wreckless Eric Radio Show. I've been trying to get a show together for some time but my efforts were always interrupted by a toothily grinning little girl asking 'What are you doing?' followed by more insane dancing, frivolity and stories about a skunk called Mike. 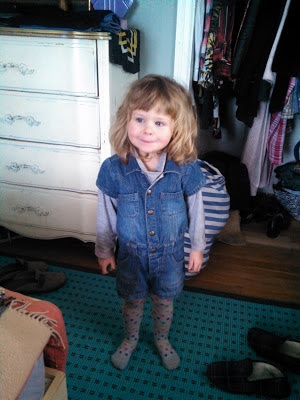 We're playing on Long Island on Sunday and the following week, February 16th, we're putting on another Homemade Aeroplane show at our house in Catskill NY. As with the other ones we've got a surprise special guest – I'm very excited about the guest but of course I can't say who it is or it won't be a surprise. At the last one we had Brian Dewan who accompanied himself on an electric autoharp propped up on an old persons walking frame and backed by Amy on piano and organ and me on the bass guitar. I think it's the first time I've ever played with someone who wore a tweed sports jacket. Brian is a wonderful and disquieting performer who somehow puts me in mind of a curmudgeonly Airedale. He's like a children's entertainer that you wouldn't let anywhere near the kids. Typically I don't appear to have a single photo of the event.

For the next aeroplane show we're going to do The Mod Housewife meets The Donovan Of Trash. We have an idea that the songs from these two albums might intersect in a good way – we're going to learn how to play as many of them as we can and see how they fit together on the night.... Tickets are $20 each and we ask you to bring something to share - a bottle of wine, a loaf of bread, a pot of soup, a pie, a dessert, an crate of oranges, a bar of chocolate... anything really - it's just a matter of people getting together and enjoying each other's company. And apart from that you get to hear us play live in our own house, sounding exactly as we want to sound, performing through the famed Empress Of Catskill Public Address System.
Here's a ticket link in case I've inadvertently sold the idea to anyone: http://wrecklesseric.com/?p=665

And now perhaps I can get back to doing a few more paintings. See you soon.
Posted by Eric Goulden at 16:52 7 comments: