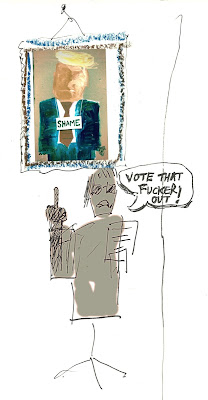 I don’t have a vote here in the USA. I live here, own a house here, pay property taxes and make a tax declaration every year, but I don’t have a vote. I have a green card entitling me to long-term residence but with no voting rights. Some might argue that it’s taxation without representation which is unconstitutional, but considering the current president has clearly never read and understood the American Constitution that argument isn’t going to take you very far.

People have asked me why I haven’t applied for citizenship. I was going to, I really was, until just under four years ago. A friend of mine got citizenship and I saw a photo of him standing next to the Stars & Stripes holding his right hand up in a salute of allegiance with a framed photo of President Obama behind him. I would have been ok with that but things changed, and now the only way I could give that salute of allegiance would be to have three fingers on my right hand amputated leaving just the middle finger. I need those fingers to play the guitar and other instruments, so I remain a green card holder.

This doesn’t stop me from having an opinion and taking a political stance. I’m really heartened to see that so many people have already voted. I hope that most of these votes are for Joe Biden. I know Biden might not be the ideal candidate or many people’s preferred preference but he’s what we’ve got at this point. A non-vote or a vote for another candidate who has no chance of winning is effectively a vote for Donald Trump. As we sang in Vote That Fucker Out: it’s the devil you can work with or the devil you hate…

I should have become an American citizen but I’ve spent the past three and a half years wondering if I actually want to be a citizen of a country with such an abhorrent administration. And then I had Covid and an attendant heart attack, and then it was too late. So I’m still just a green card holder and I still don’t have a vote.

Maybe you’re reading this and you haven’t voted and you’re thinking you’ll just stay home and not bother. Maybe you think there’s no point because whatever will be will be, or you think it makes no difference anyway - you’re wrong about that, it does make a difference, but only if you actually do it. So if you’re one of those you could do me a favour - on Tuesday take a walk to the voting station and vote for me.