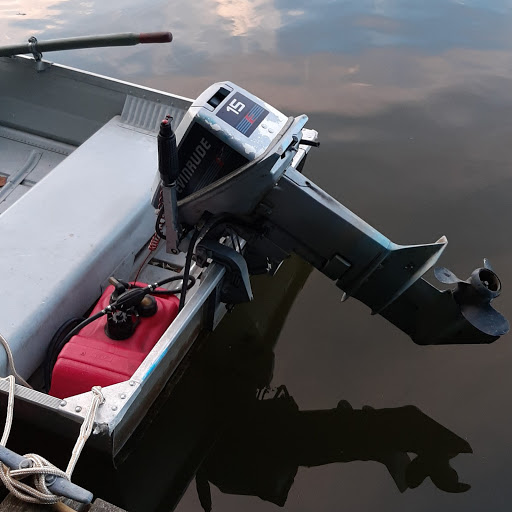 All boat mechanics are called Mike. In fact anyone who has to do with the running of things in the boating community is called Mike. They have to be: there’s Mike who runs the Bliss Marina in Catskill where we park/moor/dock the boat (never sure of the correct term), there’s Mike the boat mechanic at the Hop O’Nose marina, and there’s Mike across the creek at the other marina.
Then there’s Larry - he’s obviously the exception that proves the rule. But he’s down near Poughkeepsie where the rules are probably different. One day, when his time isn’t taken up with delivering the posh Closer-To-New-York-City boating crowd from disasters like having their floating gin palaces sink due to the batteries that drive their bilge pumps going flat in the wake of torrential rain storms, Larry is going to sell me a reconditioned Johnson Seahorse outboard. He just needs to find the time to recondition it.
In the meantime Mike the mechanic twiddled with the motor last Friday resulting in a weekend of boat trips up and down the creek and out onto the utterly terrifying Hudson river. It was all quite wonderful but Monday evening came around and it became evident after thirty or so pulls on the starting cord that the Evinrude is settling in for a week off.
I think the two stroke ratio is off. Everyone says 50:1 - that’s fifty parts gasoline to one part two stroke oil. If I was ploughing up the creek at a forty-five degree angle with the motor on full throttle, terrifying myself and everyone else, the ratio would probably be fine, but I hardly ever push it above a steady five mile an hour chug so the plugs keep oiling up.
The guy I bought the motor from told me 100:1 is the correct ratio and there’s a sticker next to the fuel intake that says 100:1, but I bowed to the superior knowledge of men called Mike because the guy I bought it from was called Scott, so what would he know?
I’m thinking Scott might be right.
I took a can of gas down to the boat and diluted the mixture. The damned thing almost started up but it gave up and so did I. So it’s back to Mike the mechanic. He’s promised to drop by and have a look at it. I think he’s impressed by my tenacity.
Amy and I went down and took a sedate row across the creek. As we paddled slowly alongside a large moored up yacht a man looked down at us:
“Outboard not working eh? Which boat is yours?”
I didn’t immediately understand what he meant but Amy caught his drift straight away.
“This is it” she said, “we don’t have a real boat, just this.”
He thought we were using it to row out to our own massive yacht. He looked slightly taken aback and went back to what he was doing, which was attending to a barbecue.
Amy asked him what he was having for dinner.
Hamburgers, he was grilling hamburgers.
“Imagine,” I said, ‘having a boat large enough to grill hamburgers on.”
We sloshed away in our tin tub with its defunct outboard hanging off the back.
The dismal sound of the same four chords being played over and over on a ukelele wafted across the creek. It appeared to be coming from the house that until yesterday had a large banner hung off its balcony that said Get Aboard The Trump Train 2020. Today the banner is gone. Perhaps they watched the Republican Convention. Or heard our latest track: