Getting Ready To Go On Tour

How do you get ready to go on tour? If I put a capital letter at the beginning of every word in the title perhaps it'll assume some kind of importance and I'll be galvanised into action. The day of departure always seems a long way off but then it's suddenly looming up like a brick wall in a car crash. I'm a deer frozen in the glare of headlights. I'm anticipating the point of impact, airbag white then near silence, just the ghastly tick of distressed metal trying to settle itself... I like these car related similes. Better than the para-military ones so beloved of mediocre rock writers -  the first song is an opening salvo, with their first album the group stick there heads above the parapet, and by the tenth album they're weary battle-hardened veterans, casualties of active service... and so on.

I didn't do anything much to prepare for battle today. I phoned Andre Barreau and told him Barry Payne will be joining us for the band shows at The Prince Albert in Brighton and The Lexington in London. Barry played the bass guitar on my first album when he was fifteen. He still plays the same bass, a Mosrite copy that he bought for twenty one pounds in Woolworths in 1972. And I bet it still sounds great. I hope it does - he got other bass guitarsbut he's using that one for old times sake. And because it sounds great. Here's a photo of it that Barry posted on Facebook: 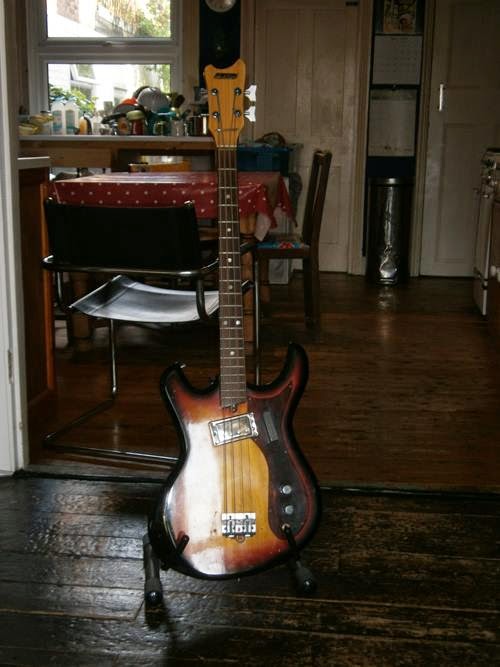 I talked with Andre, posted a boastful Facebook post on about an article that arrived today in the magazine Uncut, and sent a tentative email to the manager of the one special guest I want for the Eric60 / Fire30 birthday show on May 17th.

Then I drove up to Troy to meet my friend Jim who runs the River Street Beat Club, one of upstate New York's best record shops. Jim called me because one of Troy's pawn shops is shutting down and selling everything off cheap. They didn't have much, the usual collection of crappy, solid state, budget guitar amps. Controls that crackle and cut out, cheap rattling speakers, broken knobs, built-in dermatitis...

We had lunch at an old Troy luncheonette that's about to close down. We found an amplifier for Jim's son in a guitar shop I never been in before. We went back to the record shop where Jim gave me an Artie Shaw album for Amy and I bought a Wet Willie album that may or may not be any good.

I left a few copies of the latest Wreckless Eric & Amy Rigby album, A Working Museum, vinyl and CD, and drove home.

Brian Dewan called. Laura Cantrell's playing at the BSP Lounge down in Kingston tonight. We're going in the Buick, picking up Brian on the way.

I'm no closer to being ready to go on tour than I was this morning.

Not that I'm bragging or boasting or letting success go to my head but here's the Uncut review. If you want to actually read it I expect you can click on it and blow it up to life-size but you don't have to because I've already learned it by heart:

And if you got that far here's a ticket link for the Lexington show on May 17th: Ticket Link

And one for Leeds on May 25th (I know I'm pushing it): Leeds Ticket Link
Posted by Eric Goulden at 19:26