Eric Is Not Up To Much

I accidentally clicked on something in Hotmail and found myself in the midst of my Windows Live Messenger account, a lot of nonsense that could enable me to keep in touch with my entire universe 24/7, and, at the flicker of an eyelid, tell the waiting world what I'm up to. Well, in lieu of me telling the eagerly bated World At Large what I'm up to (is that baited as in a fish hook or is there a condition known as bated that applies to breathing?), Windows Messenger seems to have taken it upon itself to carry the news in big letters that Eric Is Not Up To Anything.
I felt that I was being chastised for not joining in - my first reaction was to change it, but that would involve joining in and my choice is not to. I choose not to because I'm not having peer pressure applied by some virtual big brother bully boy. 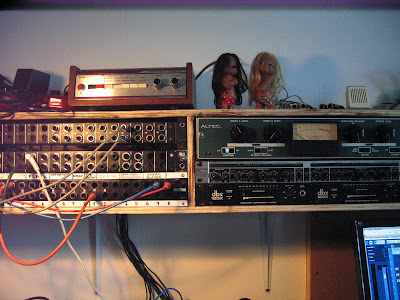 Eric is far from Idle (ha ha ha) - I'm busy with Alan Clayson's album. It's been taking a long time. I've created most of the backing tracks myself with guidance from demo cassettes recorded at The Clayson Laboratory of Lo-fi Intergalactica. A bit difficult because he uses two or three different cassette recorders, transferring stuff between them, and none of them run at the correct (or should we say accepted) speed. So it's fairly tricky trying to determine the key signature. And as for the timing, there's a time signature somewhere between 2/4 and 3/4 which is peculier only to Alan. It's quite a job but the results are fabulous. I've played most of the instruments myself with piano contributions from Amy and our friend Graham Beck, and a couple of appearances from Ian Button on the drums , and of course Alan on piano and harmonium ('I shall have legs like whipcord').
We're nearing completion now, I'm looking forward to another visit from Alan to finish the remaining vocal overdubs and then I'll be mixing it.
When we started, a couple of years ago, Alan said he'd like to make an album like Bungalow Hi. 'That might take some time' I said. And I was right - it has. I hope the finished album shows at least a few people what a great talent Alan Clayson really is.
That's what I've been up to for the past couple of days. And apart from that, if anyone can be bothered, just tell that nosey parker Messenger thing that the Trident desk is improving daily and looking forward to a complete new set of faders. Here's another photo: 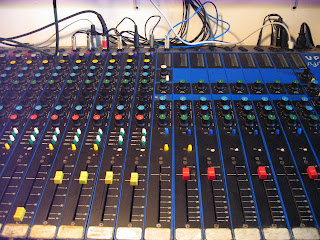