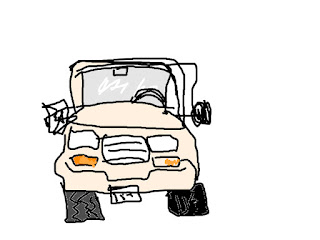 The truck needed an inspection. I took it along to the usual place where they were nice and a Hispanic American man used to take care of things. He isn’t there anymore. The whole cast of characters appears to have slowly changed along with the vibe. They have a reception now where once they had a grubby corner of the workshop. The reception is manned by a vicious-looking woman who has spent the pandemic wearing a mask under her bulbous nose. I think her sister, another bulbous under the nose mask women, works as the reception desk manner at the Family Health Clinic in Catskill where she has a Make America Great Again sticker cleverly concealed where you almost just can’t see it on the side of her filing cabinet.
There was a line of cars waiting to drive in for oil changes and to have tyres or bits of exhaust systems replaced. For New York State Inspections you used to have to leave the vehicle with them and come back later to get the good or bad news. I couldn’t get around them so I joined the line of cars and as the line wasn’t moving I got out of the truck and headed for the office where I told the the vicious woman I’d come for an inspection. She told me I had to join the line and there would be a three quarter hour wait. I asked if I could leave the truck with them. She looked at me as though I was crazy and said no.
When I got back to the truck a bossy young man with a clipboard was yelling at Amy (who had come in her car to give me a ride home). He was telling her I couldn’t leave a vehicle unattended. Nothing had moved while I was away so I don’t know what he was getting upset about. I told him I’d come for the inspection and that I usually just left it with them.
’Not anymore buddy. We can’t risk having people park their vehicles here. You’ll just have to wait. It’ll be about an hour.’
We left.
I looked for another inspection place. There was Mavis where they’re very nice, very professional, and when you come in for an oil change there’s always something they need to show you, and you leave three hours later in a daze having paid seven hundred dollars for something that it later transpires didn’t need doing after all. There was one other place, tucked away between a gas station and the freight line. i gave them a call.
The voice that answered didn’t seem to know what was what but somehow we established that they did New York State Inspections and the voice told me to come in at eight o’clock on Monday morning and tell them I’d called on Friday afternoon. No details were requested.
Monday morning rolled around and I rolled out of bed into my clothes and into the truck and drove it around to the garage. It was an old freight depot. It looked like a bit of a dump, but unless they’re part of a corporate chain with enough melamine and plastic to disguise the crappiness, these places often do. I walked into a large entrance hall - greasy wood, pegboard, grimy linoleum, with a counter to one side. There was no one there. I waited. A man burst through a door clutching some papers, walked purposefully across the entrance hall and disappeared through another door completely ignoring me. I waited a while longer and another man appeared from some gloomy recess. He busied himself behind the counter stapling papers together and consulting a screen. Gnarly, unshaven, thick lenses in silver aviator frames. A sign pinned to the tongue and groove behind him said Blessed Be The Name Of Our Lord Jesus Christ.
‘Wadda you want?’
I told him I’d come to get my truck inspected.
‘Keys?’
He walked outside with an angry ape-like walk and scampered around the truck, looking at it. I asked permission to come back later. When I returned after an hour or so the truck was parked in exactly the same place as before sporting a new inspection certificate - good for a whole year.
It took a while to pay because the card reader was on the same line as the phone and calls kept coming in.
He sighed, almost apologetic - ‘I have to get this.’
I’m good at joining in these situations - ‘I bet it never stops’ I said.
He laughed a frothy, unmasked laugh as though I’d said something hilarious.
‘You got that right boy!’
Posted by Eric Goulden at 19:40

I have no shows scheduled right now. The September / October 2021 US tour was a great success and everything's in the planning stage. See you somewhere next year!
As Wreckless Eric he needs little introduction — he wrote and recorded the classic Whole Wide World and had a hit with it back in 1977. Since then it's been a hit for countless other artists including The Monkees, Cage The Elephant and most recently for Billie Joe Armstrong of Green Day.
As Eric Goulden it's a little more complicated - a musician, artist, writer, recording engineer and producer, he didn’t like either the music business or the mechanics of fame or the name he’d been given to hide behind, so he crawled out of the spotlight and went underground. He went on to release twenty something albums in forty something years under various names -
The Len Bright Combo, Le Beat Group Electrique, The Donovan Of Trash, The Hitsville House Band, and with his wife as one half of Wreckless Eric & Amy Rigby, finally realizing he was stuck with the name Wreckless Eric.
Eric’s three most recent albums ‘amERICa’, Construction Time & Demolition and Transience are widely praised as his best work to date. His albums encapsulate pop, bubblegum, garage trash and psychedelia. His live performance is a sonic journey through time and space incorporating songs from all stages of his long career. Unmasked, unhinged and still alive - a survivor of Covid-19 (resulting in a near-fatal heart attack), Eric presents himself alone if not simply with electric and acoustic guitars, electrified harmonica, piano and electronics of his own making.