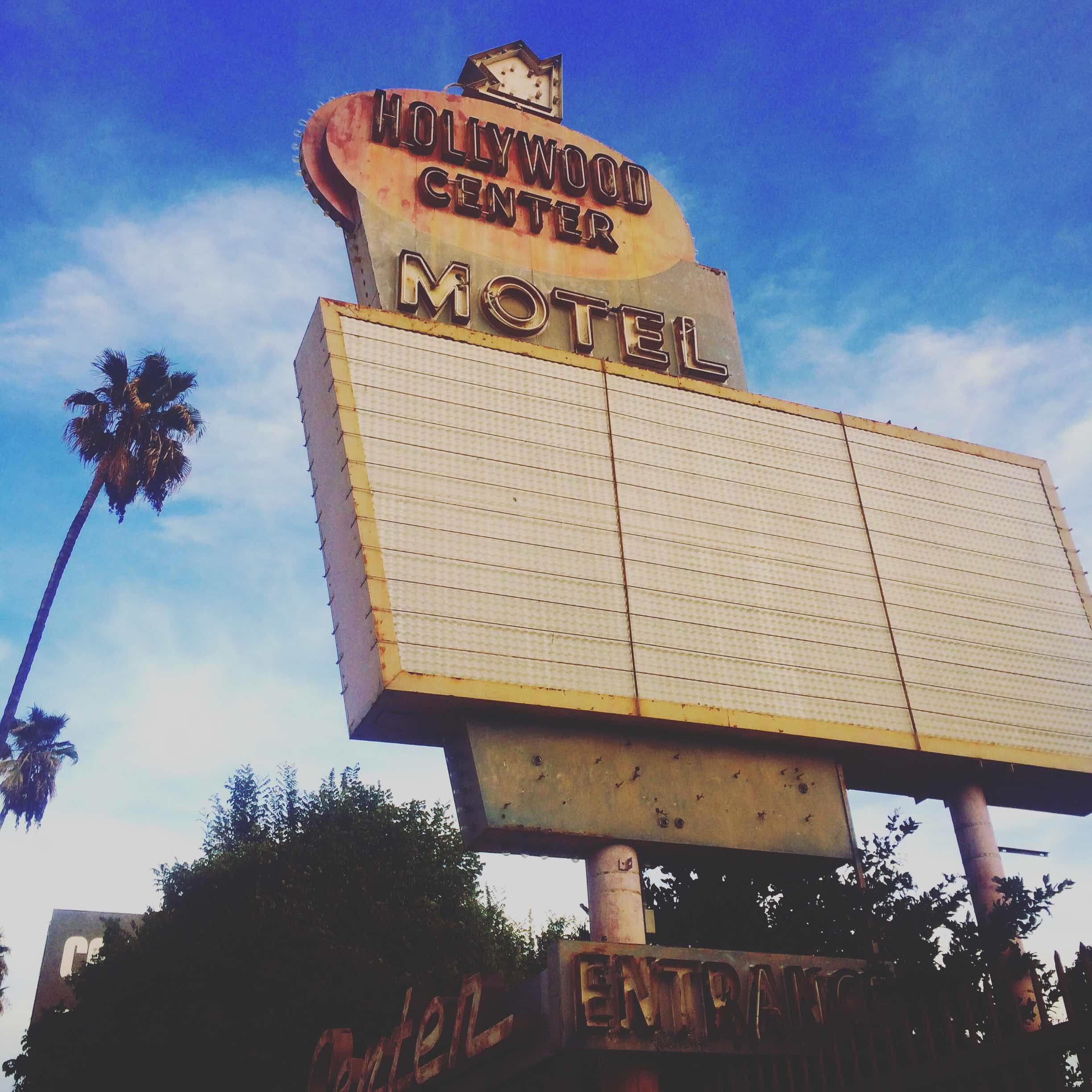 It was strange to be adrift in Los Angeles. I arrived on Wednesday and took a taxi from the airport to the Air B’n’B where I was staying. I should have got an Uber - it would have been cheaper for one thing, but I’d never done it before, just downloaded the app, and I believed it when it said the driver wouldn’t be there for forty five minutes. Subsequently I’ve found that there’ll be a driver there within three minutes but I didn’t know how it worked and I was tired, so I took a cab.

Being the callow rustic that I am I asked the driver if it was possible to pay with a card. I was travel weary and I had a flashback to the days when cash was king and nobody I knew had a bank card. We’re talking about some time in the early eighties here. Actually I never had a bank card until the end of the nineties. Before then my bank account teetered on the edge of an overdraft and I subsisted from week to week or months to month on whatever money I had in my trouser pocket, cash I’d earned from playing gigs or recording desperate French garage bands.

So I regressed, asked if I could pay with a card, and the driver said sure, as long as I gave him a good tip - reason enough to give him a very small tip or no tip at all, but I gave him a decent tip which was more than he deserved though it shamed him into helping me with my luggage when we got to the Air B’n’B in West Hollywood.

The place was one of those tiny twenties or thirties studio apartment bungalows, very Spanish, it put me in mind of The Day Of The Locusts,  one big room opening off a courtyard. The room was furnished with a bed, a chair and a tiny writing desk. It had a bathroom and a small kitchen off to one side. The kitchen was full of a large fridge. There was a tiny fold out table which would have been charming if it hadn’t been almost totally taken up with one of those Keurig coffee makers and hemmed in by a huge microwave perched on a stool with a toaster sitting on top of it. There was a sink, a few cupboards containing basic kitchen stuff and a gas cooker. None of this was of use to me during my stay because I never found anywhere I could buy groceries.

Once I was installed I sat in the room for a while wondering what to do with myself. Obviously I was going to do some of my best work ever while I was here - just me sitting on the chair with my acoustic guitar, my iPad and notebooks spread out on the desk - but for now I needed to eat so I looked at Yelp and found a restaurant one block away. I went out with some trepidation - I was sure I was going to be held up and robbed at gunpoint because I’d gone backwards in time to the days when these neighborhoods were ungentrified and not at all safe. It’s a long term habit - the first time we arrived in New York the band were all wondering what to do. It was pretty obvious to me that we’d head out to Max’s Kansas City and catch the Velvet Underground. Except it was 1978.

I found a place to eat one block away. It was pretty good and I didn’t get mugged either walking there or back. When I got back to the bungalow I didn’t know what to do so I watched a detective thing that I really couldn’t follow, listened to the Archers and fell asleep. I felt some sort of vague obligation to go out somewhere groovy but this being Los Angeles it probably would have taken an hour or two to get there so the feeling soon receded and I gave myself up to doing absolutely nothing in an uncluttered room.

I spent most of the next day walking around because I couldn’t think or anywhere I particularly wanted to go in an Uber. Do you go somewhere in an Uber? Or do you just Uber? Has it become a verb yet like Hoover? Or is it an Uber ride? I walked through neighborhoods of renovated bungalows, marveling at the plant life. I found my way to a coffee place, Groundwork’s on Sunset Boulevard.

I went to the Psychiatry An Industry Of Death Museum on Sunset Boulevard. I’d seen it before but never had chance to go in. It was a harrowing experience. The museum is founded and run by the Citizens Commission On Human Rights. They make the point that there is no medical or scientific basis to psychiatry and society’s belief in it is founded on a misguided supposition that psychiatry’s most eminent representatives are somehow experts in their field, even though it can be argued that they’ve never actually cured anyone, just made diagnosis upon diagnosis and prescribed a lot of very expensive drugs. It’s a multi-billion dollar industry.

I went back to the bungalow, did a Skype interview with a New Zealand radio presenter Kim Hill, who has a reputation for giving interviewees a hard time. We talked about my book, A Dysfunctional Success. She wanted to know how I remembered everything considering i was a drunk a lot of the time. I pointed out that much of the narrative took place in my childhood and at the age of nine or ten I certainly wasn’t a drunk, and for the rest I sat on walls and hung out in doorways, took notes and concentrated until the memories came back.

After the interview I got out my guitar and notebook but I didn’t do my best work, I fell asleep instead.

The next day I met my friend Jessica Espeleta for lunch over in Silverlake. We were wandering down the street in search of a coffee place when a car pulled up driven by a Mexican looking guy called Mark who was a friend of Jessica’s. He parked up and joined us for coffee. Jessica told me Mark was a good guy and had played with the Beastie Boys. It was Money Mark. I tried not to be star-struck but you know how it is. I’m sure he had no idea who I was and I doubt if he would ever have heard of me so I was cool, just a friend of Jessica’s. He was warm and friendly and we had a conversation about developments in electronic music instruments and how some of them are unfortunately just one trick ponies.

He told us about a mechanical electronic musical instrument he was working on involving piano rolls triggering synthesizers and took us to his studio just around the corner for a demonstration. He showed us some huge organ pipes he’d salvaged and some simple sound generators he was making for kids using magnets salvaged from old microwaves. We talked about guitars, and touring and stuff, and he seemed concerned that I wouldn’t be seeing my wife for a long time. What a nice man - it was worth the trip just for that afternoon. 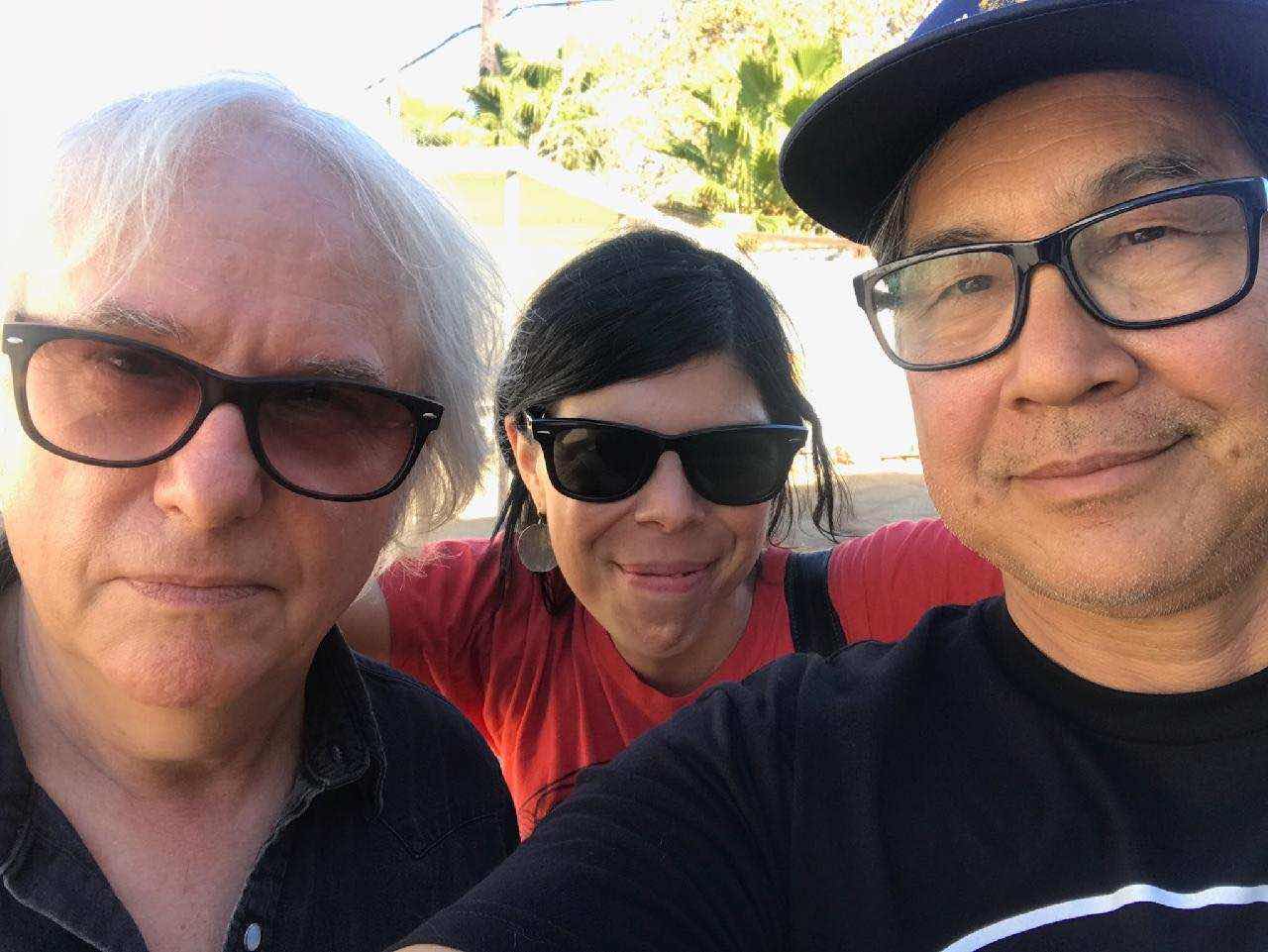 Me, Jessica and Money Mark

I Ubered my way all over Los Angeles. Apart from Jessica I didn’t see anyone else I knew so most of my conversations were with Uber drivers. I was lucky because they were all friendly and disposed to talk about stuff - the Kinks, Lenny Kaye’s original Nuggets compilation, the odiousness of Donald Trump, healthcare in America... we covered all these subjects and more.

I spent my last day in Los Angeles wondering what to do with myself and basically killing time. I was booked on a fourteen hour flight leaving at eleven o’clock on Sunday night, arriving at nine thirty on Tuesday morning. What happened to Monday? I’ve missed a day and that’s the second time it’s happened. It’s just as well I don’t like Mondays. Actually that’s not true - Mondays are loaded with promise, they’re the start of a new week - anything could happen and some of it might even be good. It’s that Boomtown Twats record I don’t like - Tell Me More... No, please don’t, just put a sock in it Bob.

I rode to the airport in an Uber that had been used to transport the body of a murder victim. I was overwhelmed by the stench of a powerful toilet cleaner mixed with stagnant water and an undertow of something deeply sinister and a lot less wholesome. The driver was a less than friendly Latin American guy with a bad taste in pop radio. He kept switching from one vacuous pop station to another. They were  all playing the same track, the one based on What Shall We Do With The Drunken Sailor that I discussed in my last post. I think he was using this all-consuming blandness to blank out the memory of the terrible thing he’d done. By the time we arrived at the airport I felt quite queasy.

Labels: Air B n B, Los Angeles, Money Mark, the Beastie Boys, The Day Of The Locusts, Uber