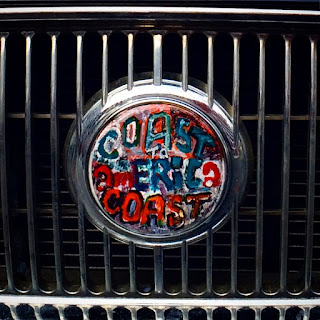 Leaving home was the worst part. I didn’t know what I’d need - shirts, socks, phone charger, notebook, toothbrush, glasses, iPod… It surely couldn’t be enough because I was going to be gone forever. It was cold, unseasonably cold for April, but I’d be returning to the mid-June heat. I was confused. And I still had laryngitis even though I was pretending I hadn’t.

It’s been months in the planning, a coast to coast tour of the US and Canada. Now the day had finally come and I could have quite happily called it off. I had a last espresso at Moto in Hudson, packed a case and loaded my amplifier and guitars into the Buick. I said goodbye to Amy and set off through the rain in the direction of the Thruway heading south.

I was going to leave early in the morning but what with feeling under the weather and not really wanting to go because it seemed I’d only just come back from being away in Europe for a month - I was home for all of five days - so I didn’t set off until something like 3 o’clock in the afternoon.

I stayed in a disgusting hotel in Fredericksburg, Virginia. I found it through Hotwire. I don’t think I’m going to use Hotwire anymore - they’re supposed to be offering cheap hotel deals but quite often it’s the same price as it would be if you booked direct, and if you booked direct you’d know what you were getting before you commited, and wouldn’t end up in some toilet of a hotel where a non-smoking room is one that’s had the ashtray removed that morning.

The next day I drove to Chapel Hill in North Carolina through torrential rain. I had no expectation of playing in Chapel Hill, except that it’s on the way south and I have good friends there. And of course I like playing at Local 506 -  Amy and I have played there together twice. When I arrived the had rain stopped and I knew the sound engineer from a show we did down there with Ian Hunter so things started to look up. There was even an audience, not a huge audience, but they were attentive and it felt like a special occasion. I had trouble with my voice but it was fun and I think I played well.

It seemed to take all day to get to Charlotte and on the way a piece of metal fell off the bottom of  the car. Wires were hanging down underneath but I carried on undeterred. The sound engineer let me know early in the proceedings that not only had he worked at the Double Door for twenty years but he’d also done in-ear monitors for Tom Petty, so he knew what he was doing. I was a little confused by that because he was working at the Double Door now so the Tom Petty gig must have been twenty years ago and I don’t believe they had in-ear monitors twenty years ago,  so he must have taken a sabbatical to do it, in which case one could say that technically he was lying. The monitors were different when I came on to how they'd been at the soundcheck.

The show went well and afterwards the owner showed me a photo of Eric Clapton taken there in 1973. After playing some vast arena he came down to the Double Door to jam with a band of southern hotshots for a smaller audience than the one I’d played to. Sadly the place is closing down - the university are buying up the block and demolishing it. Shame someone can’t buy the university, demolish that and leave the Double Door alone.

I stayed in a large and horrible hotel out by the airport. I got the last room. The desk clerk was a scrawny young woman, lank greasy hair, skin like cigarette ash, chipped white nail polish. She kept calling me hon.
‘It is a non-smoking room?’ I asked, ‘it has to be non-smoking.’
‘Hold on hon, I’ll just go and check.’
She dashed out of a back door and came back breathless, three minutes late.
‘Yes hon, that’s all taken care of.’
When I got to the room it was thick with the stench of stale cigarette smoke. The air conditioner was turned up full and there was no ashtray.
There was little point in complaining - she meant well and that’s how they do things in some states. I wish there was a nationwide ban on smoking in hotels. I slept badly and woke up feeling ill.


Knoxville was fun. I was getting into the swing of it and my voice was coming back. Knoxville’s always fun because it involves hanging out with Tim Lee and Susan Bauer Lee. They’ve been organising a series of shows at Sweet P’s, a downhome barbeque place on the river just outside Knoxville. A simple affair with a vocal PA, no stage and a mixed audience of rabid fans and a cluttering of people who’d come to eat barbeque.

Tim and Susan played an opening set. Tim gets a huge guitar sound out of a tiny Fender Pro Junior - a volume control, a tone control and a ten inch speaker. Makes me wonder why I’m dragging the Guild Superstar amp around with me. Though when I think about it he has a pedalboard the size of a house, so it’s swings and roundabouts as they say, or in this case amps and pedalboards. (I think I’ve just negated a pointless metaphor there). They played my favourite song of theirs, Magnolia Plates. That song is full of romance - Mississippi where they come from, moolight on fluorescent cottonfields - it almost moves me to tears just thinking about it.

A large hairy man approached me and said he’d been told to give me a hug from my friend Mike Fickel down in Texas. It was Jon Dee Graham. I’d been hoping I might meet him one day. Jon Dee was in the True Believers with Alejandro Escovedo. He was playing later that night in Knoxville. He stuck around for my show and told everyone that he’d been ‘jaw-dropped’. I was somewhat thrilled to hear that and further thrilled to hear him play later that night. I hope I get to see him again when I play in Texas next month.

I checked into a hotel at two in the morning. The desk clerk said: ‘I can give you a king or put you in a room with two queens.’ 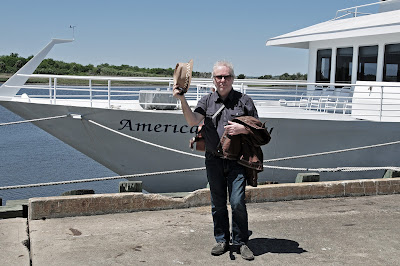