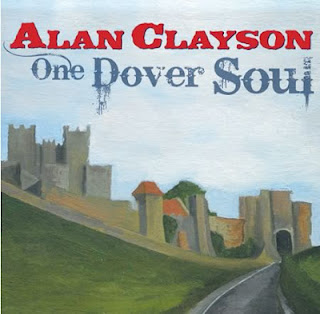 The Alan Clayson album is finally upon us! I seem to have been recording it for years and I actually finished it in France last spring, just before we moved to America. But it's still taken ages to actually make it into a living breathing and totally inert CD album thing.

We started recording at my house in Norfolk back in 2005. Alan was much enamoured with my Bungalow Hi album and hoped to make his version – as Alan might say (and probably did) my Satanic Majesties to your Sergeant Pepper's... An impossible undertaking, I assured him of that but I think we might just have achieved it.

In the absence of a recording budget, and because it was a labour of love, I chipped away at it in our studio in France between sessions for the first Eric & Amy album, between Rotifer sessions and Two-Way Family Favourites. I interpreted Clayson cassette demos and deciphered chord charts which he sent to me in triple-sealed anti-plagerism envelopes. I slowly constructed backing tracks.for the songs which he then came over and sang, once in an August heatwave and again during a freezing January when we almost willfully ran out of heating oil in honour of his visit.

I say interpret and decipher because a typical Clayson demo might start out as a cassette of him singing and playing his slightly out of tune upright piano, which he transfers to a second cassette player with him playing an orchestral keyboard line, possibly on the keyboard he found in a rubbish skip back in nineteen eighty something. The differing speeds of the cassette players put the end result into questionable key signatures. And there was always the matter of what I came to know as Clayson Time – a weird amalgam, somewhere between four/four or two/four with bars that stretch just ever so slightly and chords that change just before or just after a beat somewhere within the bar...

Alan is a unique individual. Fools might find him easy to laugh at – I've done gigs with him where audiences tittered nervously - I don't know why you're laughing, I haven't said anything funny. Yet... I've sat transfixed in my corner, the sole member of The Alan Clayson Orchestra, clutching my guitar as Alan further bamboozled an already puzzled audience with tales of insane record collectors – and I'm not just talking about obsession as in someone who might name their cats Jerry, Lee and Lewis... show-biz sleaze - you could hear the dandruff falling from her hair... an intergalactic extravaganza with audio visual aids made from Shredded Wheat Packets and readings from The Readers Digest Atlas Of The Universe – I don't know how Eric proposes to extricate himself from this psychedelic maelstrom but I'm going to achieve this by simply switching everything off at the main socket...

Very hard to translate to an album if it weren't for the fantastical world that his songs inhabit. People meet in buffet queues, they go to soirees, young men lurk outside village halls befriending rodent vermin in the half light. A DJ with a catch phrase (I bet that scared yer!) plays death discs until it's time to go home and mow the lawn, and who knows what mad things patrol the moors in a previous century – racing clouds at evetide down and Cressida clad in the season's gown...

Joe Meek and Screaming Lord Sutch, matching guitars, matching stage suits - stained but shiny - grease paint, Russ Conway and Brickwoods Pale Ale - a world of cardboard suitcases and squalid trysts in boarding houses in Margate and Weston Super Mare - a madman controlled by voices on a homebound commuter train – not a modern day train - this one's doubtless a swaying Southern Region job packed with bowler-hatted extras from Tony Hancocks The Rebel - the train is howling like a wounded beast... and he stumps off leaving God knows what devastation in his wake, and then we're by the seaside where pram-pushing housewives brave networks of queues and their brats sometimes scream and see visions, though they bawl and catcall under sepia skies far from the Old Dover Road.

I want everyone to hear this album, to own a copy. Not to make me and Alan rich - that's probably not going to happen though Alan has at times phoned me with the news that he thinks he might have a hit record on his hands. The last one was Ug The Caveman included on this album - just right for Ed Stewpot and Junior Choice.

Everyone should get a glimpse of the world from the Clayson perspective.

You can buy the album from my site: wrecklesseric.com/shop or from Alan's site where you'll find out all manner of interesting stuff about him... http://www.alanclayson.com/

Hope I don't appear to be pushy - I'm doing this for your own good!
Posted by Eric Goulden at 12:52