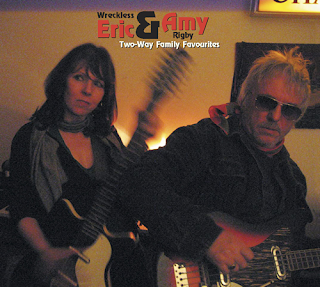 Do yourself (and us) a favour and order a signed copy of our new album now, before they're all snapped up.
Posted by Eric Goulden at 13:03

03 COLUMBUS OH Spoonful Records
04 BUFFALO NY Mohawk Place
05 ROCHESTER NY The Bop Shop
more to follow
As Wreckless Eric he needs little introduction — he wrote and recorded the classic Whole Wide World and had a hit with it back in 1977. Since then it's been a hit for countless other artists including The Monkees, Cage The Elephant and most recently for Billie Joe Armstrong of Green Day.
As Eric Goulden it's a little more complicated - a musician, artist, writer, recording engineer and producer, he didn’t like either the music business or the mechanics of fame or the name he’d been given to hide behind, so he crawled out of the spotlight and went underground. He went on to release twenty something albums in forty something years under various names - The Len Bright Combo, Le Beat Group Electrique, The Donovan Of Trash, The Hitsville House Band, and with his wife as one half of Wreckless Eric & Amy Rigby, finally realizing he was stuck with the name Wreckless Eric.
Eric’s three most recent albums ‘amERICa’, Construction Time & Demolition and Transience are widely praised as his best work to date. His albums encapsulate pop, bubblegum, garage trash and psychedelia. His live performance is a sonic journey through time and space incorporating songs from all stages of his long career. Unmasked, unhinged and still alive - a survivor of Covid-19 (resulting in a near-fatal heart attack), Eric presents himself alone if not simply with electric and acoustic guitars, electrified harmonica, piano and electronics of his own making.