This is a radical new departure for me, not Ericland - I had that going back when this internet thing was in its infancy - it's blogging that's a departure. I still have trouble using such an intrinsically unattractive word for an activity that I always thought was wonderful, inspirirng, life-affirming... communication that is, poetry and prose, stream of conciousness, real life stories and ridiculous adventures out in the world and skittering across a computer keyboard.

Amy has been doing very well with hers and people are always asking when I'm going to start writing this kind of stuff again and on a regular basis, but the truth is I did it for a good few years towards the end of the nineties and into whatever this decade calls itself (and I refuse to call it the naughties), and it must have worn me out.

The radio show have been something of a success - I've been forced into coping with the business of blogspotism, and it's been surprising easy and non-labour intensive. Updating the diary/news page on my site is terribly laborious. I use an out of date version of Dreamweaver. I've never really got the hang of it, just learned enough to do what I have to. It involves opening and updating files and dragging and dropping links and uploading - apart frrom the lack of physical exercise it's not unlike working in a factory. It's time consuming, tedious, and I can only do it on my own computer.

Sometimes I think life's too short, and it seems to be getting shorter. Twenty years ago I was a mad young thing of thirty five with a mental age of twenty five. Now I'm just a few years off being presented with a bus pass and the unthinkable, unspeakable idea of not dying before I get old is looking more and more inevitable. In another twenty years I'll be older than my dad was when he expired from old age.

I don't think I'll be ready to die, though God knows, a lot of the time this world gets on my nerves. I've got too much to do. And it doesn't matter how much I get done, it doesn't look like I'll ever be finished.

I've gone and shunted us into a morbid cul-de-sac here so that's a great start. We've got to brave the tedious city of Limoges today. We've got to get posters done for our UK tour next month and I've got to get some switch cleaner and various components for the beautiful late seventies Trident desk that's now installed, and almost fully functioning in the studio. 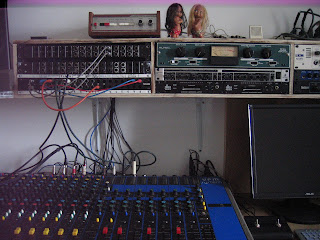 I want to spend a lot more time in the studio in future and less time touring. So if anyone wants to come over and record an album here I'm open for business. And you'll even get bass playing and harmonies thrown in.

This has all been a bit of a success so far - I even uploaded a photo, not the most inspiring photo I've ever taken but all I did was press the shutter. It, my new friend blogger, did all the uploading while I made a cup of tea.
Posted by Eric Goulden at 04:19