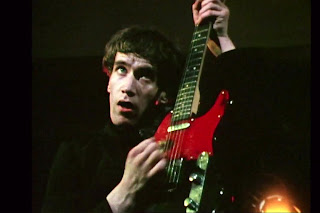 I’m very sad for the passing of Wilko Johnson. I flew to England and got the news when I arrived. I’m glad to be in England at the moment, it seems appropriate - Wilko may have been playing American music but he remains an absolutely English phenomenon.
As soon as I heard Doctor Feelgood I was a fan. I bought their first album as soon as it came out in 1975. Down By The Jetty was not like other albums or LPs of the time. It was in mono and the cover was black and white. It didn’t present the value-for-money facade of the lurid, multi-coloured, Roger Dean gatefold designs and the all-across-the-fireplace stereo spread of other albums, even though it had more tunes on it than seemed possible in the mid-seventies - it contained thirteen tracks, and that was one more than the Rolling Stones first album released only eleven years earlier. I went to the record shop, bought a copy and it changed my life.
There were no wailing guitar solos, no wall-to-wall carpet of deluxe and luscious harmony vocals, and there appeared to be not a single drum fill.  And there were lyrics - direct, poetic and deranged like a gonzo comic strip come to life.

Dr Feelgood wore suits and ties. They were photographed by a sea wall with a grimy cargo ship parked casually behind them, or outside an old-fashioned barber’s shop where they’d evidently just had their hair cut. They didn’t look like other bands in band photos. They looked like they didn’t give a fuck. And if they suddenly did give a fuck, and if the singer woke up from the daze he appeared to be in, you’d probably be in trouble.

Listen to the weatherman praying for a drop of rain

Look into the sky, the sky is full of aeroplanes

I imagined I could smell the oil refineries as I stood with Lee Brilleaux, Wilko Johnson, John B Sparks and The Big Figure watching the oil flames burning bright in the full light of day, the sky full of aeroplanes jetting off to some Spanish paradise, their passengers as unaware, as I had been, of Canvey Island, this wonderful and magnificent hell on earth.
I could hardly believe a person could exist with a name like Wilko Johnson. He was a complete original. He looked like a budget version of Keith Richards, pudding basin haircut, black suit, black shirt buttoned to the neck with no tie - the look was out of time, untenable in the mid-seventies. He was Barbie’s Ken gone loco, a guitar slinging Action Man with eyes like blazing headlights.
Wilko’s guitar playing is one of the wonders of this world. Left hand almost completely still or moving very slowly, right hand a blur. He played without a pick. I’d never seen or heard anyone play like that. A hacking of chords with wailing notes bending and bursting out of them, neither lead nor rhythm and unlike any other guitarist. Brittle and violent like glass - HH solid state amplifier, no distortion, clean, angular - modern yet deeply unfashionable. And so right.
I saw Wilko with Doctor Feelgood many times, from the early days to the meltdowns and walk-offs at the Hammersmith Odeon and Palais. I saw his subsequent bands, the Solid Senders, the short-lived Wilko Johnson and Lew Lewis amalgamation, and later on I opened for him a good few times. But I never actually met him until the early 2000s.
The truth is I was terrified of him. He cut such an unreal figure that it was different to see him as  a mere mortal, a human being, one of us. He was the epitome of dark and brooding - he had his demons - he wasn’t always the warm, outgoing and at times hilarious man he was in later life. My perception of him may of course have been coloured by hero worship.
Not that long after Ian Dury died I was opened for the Blockheads in London at the Jazz Cafe. After my set Wilko burst into the backstage. He came straight up to me. “That was a great set” he said - “You played some things on the guitar that I wish I could do.” I manage to stay cool, accept the compliment, but I was astonished. He made my day, my year, my life.
Of course, by this time the unthinkable had happened happened - Wilko had lost his hair. He seemed to carry this off with effortless aplomb  - he went from loco black-haired Ken to slack-jawed punch drunk boxer almost overnight. He carried it off because no matter what he did he exuded Wilko-ness.
A few years ago - about seventeen few years ago in fact - he toured in a package with John Otway and the Hamster who were basically a blues rock cover band with an inexplicably huge UK following. The Hamsters topped the bill, Wilko went on in the middle. At the end of his set he announced: “What follows will be truly bizarre.” And it was. At one point Wilko joined the Hamster onstage for a rendition of Born To Be Wild. He confided in me before the show : “We’ve been studying them - we think they don’t like each other - you’ll never see all three of them at the same time except on stage, and they clearly avoid being in rooms together…”
Wilko was a poet, a storyteller, highly literate and steeped in the imagery and vernacular of the blues. The most mundane account could turn into an epic tale with wild gesticulations. His big hands would reach up and place the moon in the sky for you - there always seemed to be a stars and a big silver moon in Wilko’s stories - he was a keen astronomer.
I was booked to open for him at two shows in March 2023. I was looking forward to it immensely. I hadn’t seen him in a long time - I’m an expert at losing touch. I somehow assume people I know will be around forever, but this is clearly not so. I’m going to miss Wilko - the world just lost a true original. 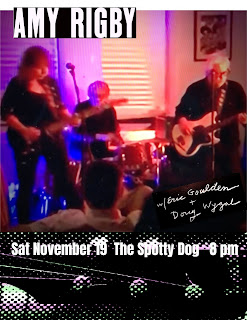