All Tours Start In Toronto

All tours start in Toronto. At least my last lot of touring before this lot started in Toronto. I remember it well - the agonizing panic of not knowing what the hell I was going to play, the wishing I written some half decent songs instead of frittering my life away in some adverse build up to this one great moment of failure...
In the end it went well, but then it usually does because it doesn’t really have much choice. It somehow has to because I couldn’t live with myself if it didn’t.
This time the touring part of the tour actually started in Toronto. But even though I find the whole idea of playing locally utterly terrifying, the prospect of setting off to play fifteen shows across the un-United States without first checking that both me and the equipment are going to work seemed much worse, so I kicked things off a few days earlier at the Hilo, our wonderful cafe bar here in Catskill.
Normally I have a psychological safety net: if this thing fucks up, if I humiliate myself with a dismal and disastrous performance it’s ok because this town, this venue, these people, will all be history one hundred miles down the road, and I need never go back. Out of sight, out of mind.
But not so with the local gig.
It went well which is fortunate because I come here for my espresso every othe day (alternating with Supernatural in Hudson). If it hadn’t I think I would have cancelled the tour and moved house instead.
I made one major change: I was using my modified Telecaster for the electric guitar bits, the one I used on the last lot of touring. After the Hilo I decided to take the big green Microfrets instead, and that’s what I’ve been playing since Toronto. The Microfrets is a scary proposition, I once gave it to Amy to play when she broke a string . She handed it back within th tears in her eyes:
‘How do you play this thing?’
I played a show in Seattle a few years back with various members of the Minus 5 including Scott McCaughey and Peter Buck. When the Microfrets broke a string Peter offered to change it while I played a different guitar. He never came back. We found him in the dressing room with the Microfrets on his lap still minus one string. He had tears in his eyes:
‘How do you string this thing?’
The strings are unevenly spaced, the top string often goes dead and produces a blick blick sound and sometimes it gets caught under one of the back pick up screws and goes plink plink. The bottom string needs constant attention because of the ludicrous tune-o-matic nut, an invention designed to ensure perfect intonation regardless of the fact that a barre chord instantly negates the entire concept. I tried taking it off and replacing it with a conventional nut but it didn’t sound the same so I put it back and resigned myself to constant maintenance. It has a tendency to vibrate loose and occasionally something falls apart - usually minutes before a live radio show - but it’s worth it because nothing sounds quite like the big green guitar, the Microfrets, or The Melon as a friend of mine once christened it. 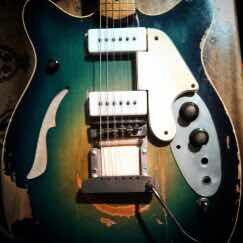 And of course it won’t have escaped the attention of anyone with an eye for detail that the Microfrets matches the green of my new album cover. It’s all in the detail.
That was a freaky business. A friend of mine, Clif Eddens runs a neon factory. He kept telling me I should come and make a neon something and the idea really appealed to me so when it came to making the artwork for Construction Time & Demolition it was the obvious thing to do - a big, randomly shaped green neon illuminating a strange collection of paintings and paraphernalia including my friend John Foster’s old wooden step ladder and (if you look very carefully) his black 1970’s dial telephone.
I assembled the whole thing in the basement of John Foster’s house down in Maryland. John photographed the installation and turned it into the cover art. We spent five hours in the basement bathed in the green nuclear neon glow, and when we came out everything was pink. The sun was going down and we rushed outside to marvel at the cosmically over-pink sunset. John’s sixteen year old daughter looked at the two of us and asked if this was what taking acid was like. We told her it very likely was but we couldn’t say for sure.

At the first show, in Toronto, audience members were perturbed by the minimal set up and several of them asked the promoter where the band was. Fortunately there were no complaints by the end. It’s a different experience - it transcends the solo/duo/full band nonsense. I hate the term full band. I’ve spent years combatting the idiotic dictate that goes something like if it’s this good solo imagine what it’ll be like with a full band... It doesn’t always follow - some artists can’t bring it on without back up, others can. You have to adjust the dynamic to play solo - you can’t get as loud or as full but you can go lower. Sometimes when I’m singing I’m not actually playing anything much at all, just the odd single note here and then so that when I play a full chord it sounds big by comparison. It’s an illusion and it requires a great deal of concentration to pull it off which is why I’ve always got pissed off when there’s talking in the audience while I’m playing. Not that there is anymore - sometimes the silence is quite eerie. It’s intimate and it’s dangerous, tenuous - it could all just come apart... 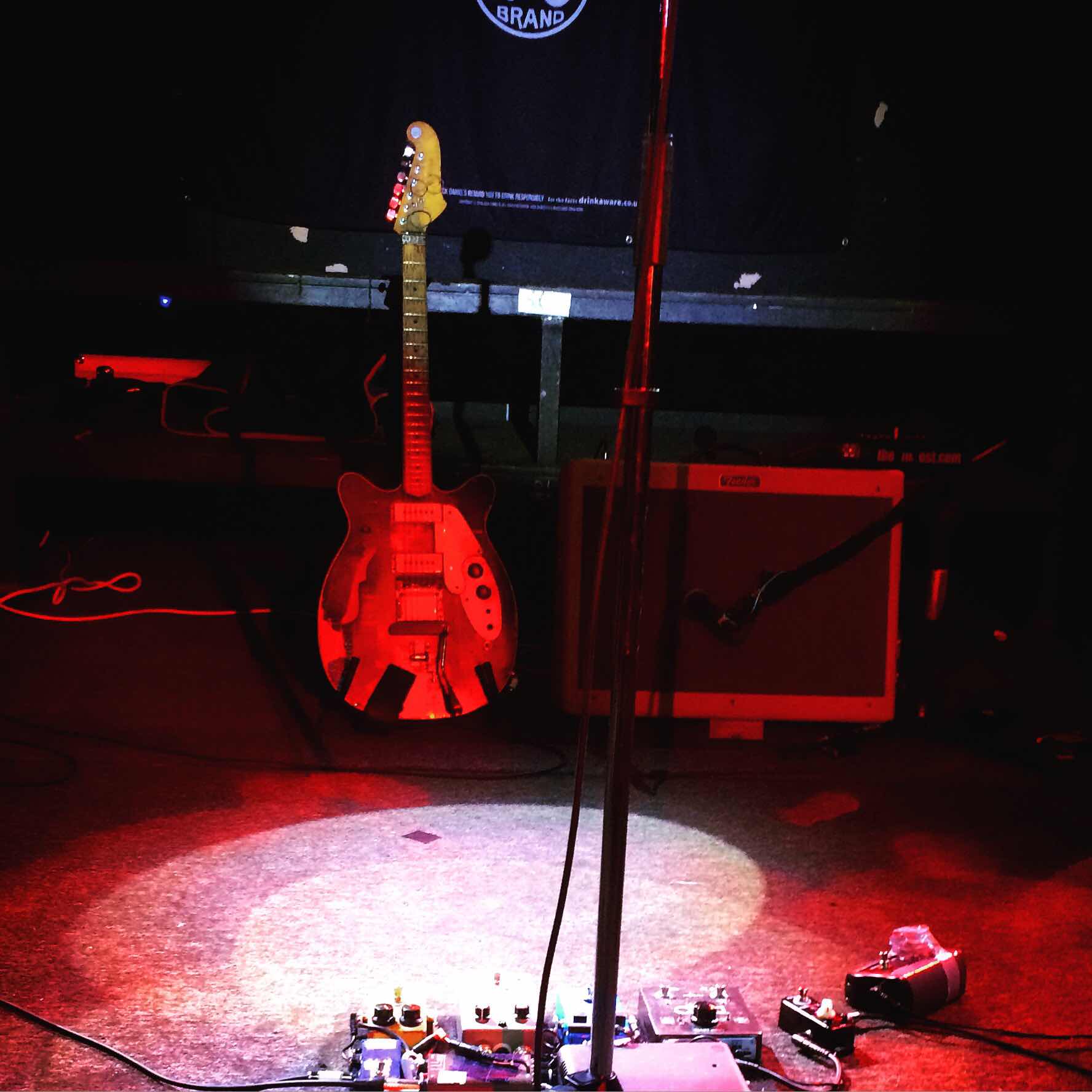 The sound engineer in Toronto reminded me that we’d met before - he played drums for Andre Williams on a UK tour and when they came to Brighton I did their sound. I tried not to look worried as I asked him how it was but I was relieved when he told me they’d heard a recording of the show made by someone in the audience and it had sounded great. And that night he did the same for me.
I don’t know how I got through the first few days. Toronto to Detroit was a fairly easy drive though it rained and I felt tired. At the border most of the gates were closed. A big sign said Welcome To The United States and underneath a row of illuminated signs said CLOSED.

Third Man Records in Detroit was everything I hoped it would be and the show was good but difficult for me because of an annoying twit at the front who kept holding his phone next to the power block in my pedalboard and filming my foot while the phone transmitted massive interference into my amp. In between and in the quiet bits he shouted requests and suggestions and turning around to take selfies with me in the background.
John Krautner opened the show alone with nothing more than a nylon strung guitar with a microphone in front of it. The twit joined in loudly with bad harmonies. John told me afterwards the guy had been annoying.
After the show he cornered me (the twit that is) and told me he was my biggest fan. I remonstrated with him, said his behaviour was disruptive. He told me I was being a dick.
A perfect Wow & Flutter moment.

Most of the time I feel like I’m just about getting away with it - it’s a shabby old one man operation, a patched-up, mend and make do traveling fairground. I should make my entrance in a cloud of diesel fumes and electrical sparks, I probably do, and most nights something needs repairing.
The rain started after the show in Chicago. I had to drive to Louisville, Kentucky, and be there in time for a radio show at lunchtime the following day. I had the best show I’ve ever had in Chicago and by the time I left the Burlington Bar it was already the following day, two in the morning. I had a hotel booked in Lafayette, Indiana, a couple of hours down the road. I thought it would get me out of Chicago, give me a head start the next day.
I’d forgotten how bad the roads are in Indiana. After a four and a half hour white knuckle drive through road works and torrential rain I checked into the hotel in full daylight. The desk clerk told me to enjoy my nap. I crashed out fully clothed for three hours, got back in the car and carried on driving - eighty miles an hour on Indiana’s broken roads, all the way to the Kentucky state line. That sounds quite glamorous. I stopped at Starbuck’s for breakfast.

I can’t recount all the steps that brought me from Indiana to a Premier Inn in Worcester in the heart of middle England where I’m seeing in my sixty fourth birthday. I’m amazed that I’ve got away with it for all these years, burning down city after city as Amy put it the other day. If you’re around I’ll see you in Bristol for my birthday, or Leeds, or Cromer... or maybe Cambridge or Brighton... And most definitely at the 100 Club on May 24th (that’s next Thursday - stick it in your diary) or if you can’t make that then Colchester, Ramsgate or Leicester.
Always playing in a town near you!

And next month back in the USA for another six weeks or so, coast to coast!
Posted by Eric Goulden at 10:34 No comments: