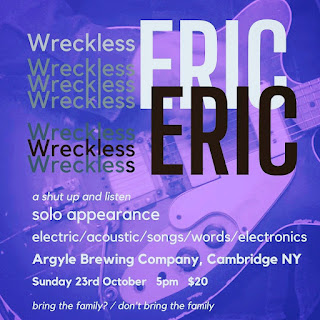 I used to take it all in my stride but getting ready to go and do shows was always a quietly fraught business for me. Sporadic shows are the worst because during the time at home the equipment gets disassembled for recording purposes, guitar cases end up in corners of the basement, batteries go flat and I lose track of which lead gets used for what.
It’s important to have a system - people might think I’m being fussy or OCD, but I’ve been going out playing shows for a very long time now, most of the time totally unaided, so I know how things can go wrong. I look after whatever is controllable - it’s advance damage limitation, but during the sporadic periods as I might call them the system quietly unravels
And I unravel too. I definitely don’t feel great these days and there seems to be no explanation for it that my GP can find. We think it’s this thing called Long Covid. It’s either that or something sinister. When I toured last year I set off a bit earlier than I normally would every day and spent an hour or two sleeping in the car in rest stops along the way.
When I played in London last July my left hand cramped up so badly that I didn’t know how I was going to finish the show. The lights were ridiculously hot and I think I was dehydrating. People were talking loudly at the back - the seven piece support who were so honoured to play on a bill with me, together with their massive entourage (they wanted thirty people on the guest list even though the show was a benefit) yack yack yacking all the way through my set.
I forget what keys the songs are in, the instrumental stuff gets sonically magnified in my imagination and falls short of anything I could ever hope to achieve. I feel clumsy and gauche, a cack-handed version of the fabricated me I’ve built up in my mind since the last outing. I had it down back then…
There’s an overwhelming amount of preparation involved in these one-off dates but in the practising and so on I discover new levels of balance and control. I hope it won’t all go out of the window the moment I go onstage - tense, over-amped, digging in too hard and losing the lightness of the quiet bits that give the loud bits at least an illusion of power. If I get anxious the dynamics go to pot.
The idea of an outing always seems attractive. I always imagine there’ll be interesting snacks and I’ll need my trusty pocket knife, but somehow I never do. I make elaborate listening plans - I’m going to listen to the entire works of David Bowie…that kind of thing. It doesn’t happen, I end up driving in silence lost in a dream of all the things I could be doing if I wasn’t doing this. Because somehow it doesn’t matter what I’m doing and how much I want to do it, when I’m doing it I often wish I was doing something else. It’s a tendency I try to guard against. Things go so much better when I live in the moment and just enjoy it. There’s even a risk that I might have fun.
Posted by Eric Goulden at 12:32