A One Way Ticket To Amy Rigby 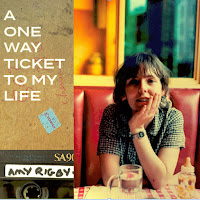 A couple of months ago, with too much to do and too little time to do it in, Amy dumped a large box of cassettes into the middle of the studio floor and asked me to go through them with her to see if we could find maybe ten or so tunes that we could make into a giveaway CD to go with pre-orders of her memoir, Girl To City.

They were four track Portastudio demos, hundreds of them it seemed. One of her brothers had been in the merchant navy, and sometime in the early eighties he found himself on shore leave in Japan where he bought a Tascam Portastudio, the very latest model of this new-tangled device, and sent it to Amy and her brother Michael to help them along with their new group, Last Roundup. For a decade or so it shuttled back and forth between their two apartments in the East Village and eventually found a permanent home in Amy’s flat in Brooklyn’s decidedly un-hip Greenpoint. And during this time she made literally hundreds of demos of songs she’d written.

The original Tascam had long ceased to function so I blew the dust off a lumpy beige Tascam 424 that I’d come by and stashed away wondering why I really needed to hang on to it. I patched the four channels through to the studio computer and set to work, wondering what I might find.

The recordings may have been rough but the execution and the sound, the atmosphere, was magical. She’d perhaps record an acoustic guitar on one track, a vocal on another, and fill the remaining two tracks with a vocal harmony and an electric guitar. Or it might have been all electric guitars and sometimes a complicated vocal harmony arrangement recorded complete with echo which apparently came from a cheap and long-lost delay pedal.

Every song was a gem - even ones that were quite blatantly aimed at the middle-of-the-road Nashville country market. I was transported into Amy’s life from long before I met her: the everyday noises of her various apartments, her daughter Hazel playing in the background and occasionally coming to the fore:

‘Do you want to here Holiday For Strings?’

A toy keyboard starts up and is immediately obliterated by the guitar intro of the next song.
When it rains you can hear it splattering in the courtyard at the back of the building through the open window. The window was evidently always open, and you can hear the shouts of neighbours and kids at play, distant traffic, car horns and police sirens. At one point a pause in the middle of a song is augmented by a loud power tool in the building next door. It sounds like a sheet of plywood being sawn in half.

Sometimes what was on the four tracks didn’t immediately make sense. Amy worked for a while at Sony and acquired a lot of tapes that had already been recorded on. Portastudios run at double speed so there might be sudden backward snatches of The Very Best Of Christopher Cross or some such nonsense, roaring in at high speed and an octave higher than it normally would be. And then a song, started, abandoned and superseded by another song which finds its way to fruition accompanied by gorgeous harmonies on another of the four tracks shared with high speed blasts of a rough mix from Diary Of A Mod Housewife.

I wanted to do as little as possible but I was very much aware that if these recordings were to be heard and appreciated they needed a certain amount of help in order to turn them into a fully listenable experience - raw is great - but unlistenable is pointless.

There were pops and bumps and rumblings - no one tells anyone how to avoid these things happening in the macho world of recording - so every time Amy sang a word beginning with P or B there would be a massive explosion into the vocal mic, and words with the letter S in the middle of them could be especially sibilant. I spent a long time at the computer taming these down. There was evidently a faulty microphone cable too - in fact I think there may have been two mic cables, one of which was good, and it was a gamble as to which one would get used, so there was often a loud buzz or hum on some of the tracks. I did what I could to reduce these things without compromising the integrity, atmosphere and intent of the original recordings.

The nineteen tracks on this album are just the tip of the iceberg, all we had time to put together with a looming deadline. There be another volume or two coming soon. In the meantime I think anyone who fancies themselves as a songwriter should listen to this collection - you might find it, as I did, a humbling experience.

Order a copy along with her new memoir Girl To City from her website: amyrigby.com

And while you're there check her tour dates!