‘And why would someone know to book you to play in Toronto?’
‘Because I’m famous - I wrote the tune they use in the McDonalds commercial’
‘Really’ (flat voice)
‘What sort of music do you play?’
I could hardly say Rock Music, just me sitting there alone, posing as an old buffer in a Buick Le Sabre, so I said the first thing that came into my head:
‘It’s Bubblegum…with dementia’
She handed back the paperwork, and threw my Green Card at me as an afterthought
‘Enjoy your stay in Canada’

I wasn’t sure that I was going to. I’ve been pretty nervous about this show, the NXNE Festival in Toronto. everyone else on the bill seems so young, vibrant, fresh, up and coming, exciting and positively now. And then there’s me - feeling in comparison like a sixty one year old has been - yes, I’m sixty one, so I must be a has been, if I ever even was.

I haven’t played for a while, not one of my own solo shows, not since last December. I’ve been busy recording a new album, and recording Amy for her new album - separate albums, two careers, two income streams… It might possibly even work. Amy and I have played together for a long time now, I’m used to it, it’s comfortable, it’s easy, I love it, but it’s time to move along - we’ve both got things we need to do. Sometimes I almost feel that the next stage is just something we’ve both got to go through and then we can get back to playing together again.

So here I am in Toronto, still desperately trying to compile a set list. I forget about songs, lose faith in the ones that bubble into my consciousness - I make lists of every song I’ve ever written on every album I’ve ever made. The list bewilders me so I look for a distraction and try to convince myself that a set list will somehow magically occur.

In my room at the Hyatt Regency Hotel I’m experiencing a crisis of confidence. I put a post on Facebook: Slowly losing my mind in a hotel room in Toronto. People posted helpful suggestion - Toronto’s a cool town, go out and explore… No chance of that, not before the execution - the show that is. No rewards, just constant low-level anxiety and a feeling of anguish.

I often wish I could start again, come at playing music fresh, fully formed but without the baggage. As much as I try to re-invent there’s still the baggage, a sense of obligation, as in people come to see me because of things I’ve done, like Whole Wide World, or Reconnez Cherie, or Take The Cash. Like it or not you get known after a while for certain things. I really don’t mind playing Whole Wide World - fuck it - I love playing Whole Wide World some nights, it’s every boy’s dream after all - it’s a hit! If I get a bit jaded (and I can honestly say I don’t) the audience’s enthusiasm for the song lifts me up and turns it into a glorious moment. But how can I do that in the context of something new without doing something lumpy and embarrassing like singing it acapella or performing it in a drone style, or worse as a rap number? I don't think I'm going to do that.

I force myself to eat and that makes me feel a bit better about everything. Then I go to the venue. The organisers, the crew, they’re all kids. The stage manager is barely twenty. She’s never done it before. They seem really pleased that I’ve actually showed up. A crew of teenage boys help me load in my equipment - two guitars, one case with leads and pedals in it, Guild Superstar amplifier that none of them can lift alone. They take it all very seriously and put everything in a corner of the tiny, grimy backstage. They want to make sure it’s going to be safe. They discuss putting some kind of tape around it as a sort of cordon but I disuade them of that idea.

There’s no soundcheck so I have a quick discussion with the sound engineer. He’s a bit older than the others. He tells me not to expect too much of the monitors, I tell him I’ve already figured that out, I’ll be using an electric guitar, no acoustic, so all I need in the monitors is my vocal and electrified harmonica. I warn him that I’ll probably be playing quite loud and he says that’s fine, he likes volume coming off the stage. This surprises me, I’ve never heard that from a sound engineer before.

Then there’s time to kill. I stroll through a residential neighbourhood and meet up with a woman called Claire who’s taking photos of me for some sort of online magazine covering the festival. I can never understand why anyone would want to take a photo of me because in the end I just look like a bloke - here I am standing in front of a tree, propping up a lamp post, loitering outside a shop… She’s very nice, good company - we talk about the nature of creativity and she takes photo with a real camera, one with film in it.

Suddenly it’s time to play. I still haven’t written a set list so I go on with a notebook open at the page where I last desperately tried to concoct a set list and play a completely unrelated set of songs. The anxiety falls away, I’m here in the moment, playing a few tunes for these people who seem so happy to see me. Someone shouts for I Wish It Would Rain and I excuse myself from playing it. ‘I’m sorry’ I say, ‘I just don’t feel like playing that one tonight, here’s another one…’

I think the set went something like: Same, Joe Meek, Several Shades Of Green, Just For You, Paris In June, Local, Sysco Trucks, Whole Wide World. I know I ended with Whole Wide World - I didn’t mean to be tacky but it was a forty minute slot and it just fell out that way, and I wanted it to follow Sysco Trucks as a sort of nod to the Canadian McDonalds TV ad that features Whole Wide World.

I have a laugh about Rush playing in Toronto on the same night. The hotel lobby was full of successful looking middle-aged men - lawyers and businessmen - looking just slightly not quite comfortable in their various eras of Rush t-shirts - all together they present a fairly awe inspiring Rush Through The Ages tableau. I talked to one of them in the elevator - he told me he’d seen Rush ninety two times. Tonight would be show number ninety three. He was excited.

I’d prefer to be Bubblegum With Dementia than Mullet Rock. 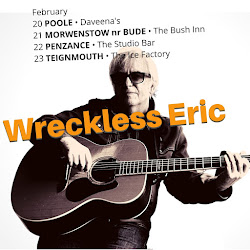